Posted by Howard Trott on Saturday, September 30, 2017 Under: Motorcycle Racers
Racing Career
Barry first started to race in 1968, winning his first races at Brands Hatch riding father Frank's 125 cc and 250 cc Bultacos. He became the British 125cc champion at age 20 in 1970. In 1971 riding an ex-works 1966 10-speed Suzuki twin, previously ridden by Stuart Graham he finished second in the 125 cc World Championship. His first Grand Prix win coming on that bike at Spa in Belgium, soon followed by a win on a 50 cc Van Veen Kreidler at Brno in Czechoslovakia, where he finished over two and a half minutes ahead. 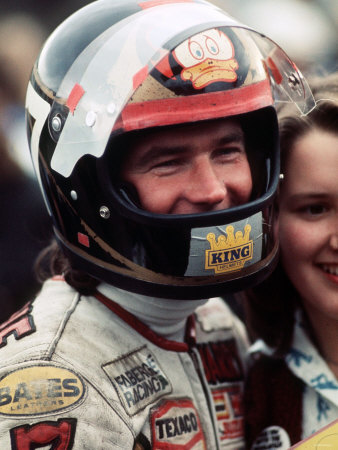 For 1972 Barry was signed to the works Yamaha team for the 250 cc World Championship. However, at the third round in Austria, after losing a sprint to the finish line to the Australian John Dodds for third place, he voiced his displeasure to team management about the performance of the bike and was dropped from the team with immediate effect. His works Yamaha YZ635 was then given to the Finnish rider, Jarno Saarinen who went on to use the bike to win the World Championship that year.
Barry was signed by Suzuki during the off season 1972–1973 and won the newly formed Formula 750 European championship for them in 1973. As a works Suzuki rider Sheene had two contracts, with the World Championship events taking precedence over his Suzuki GB contract for home and International events, if any race dates clashed.
For 1974 Suzuki introduced the RG500 which Sheene rode to a second, third and a fourth scoring 30 points and finishing sixth in the World Championship.
A spectacular crash at the Daytona 200 in the 1975 season threatened to end his career, breaking his left thigh, right arm, collarbone and two ribs, yet he recovered and was racing again seven weeks afterwards. Again riding the RG500 he scored a memorable first 500 cc win at the Dutch TT.
In the 1976 season, he won five 500cc Grands Prix, bringing him the World Championship. He took the Championship again in the 1977 season with six victories. For the 1977 season Sheene was partnered by Steve Parrish, who rode Barry's 1976 Suzuki 500 cc machine. 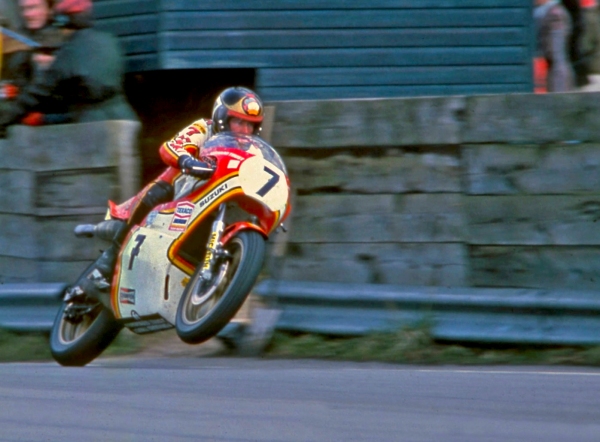 Barry's battle with Roberts at the 1979 British Grand Prix at Silverstone has been cited as one of the greatest motorcycle Grand Prix races of the 1970s. After the 1979 season, he left the Heron-Suzuki factory team, believing that he was receiving inferior equipment to his team-mates. He switched to a privateer on a Yamaha machine, but soon started receiving works equipment. In 1981, Kenny Roberts the reigning World 500cc Champion for the third time in succession. Sheene, by now on a competitive Yamaha, was determined to take the championship from him. Ironically, Sheene and Roberts battled all season and let Suzuki riders Marco Lucchinelli of Italy and American Randy Mamola beat them for the top two spots. Roberts finished third and Sheene fourth in the final World Championship standings.
A crash at Silverstone where Sheene, riding his Yamaha, hit the obscured fallen machine of Frenchman Patrick Igoa during practice for the 1982 British Grand Prix largely ended his potential as a title threat, and he retired in 1984. He remains the only rider to win Grand Prix races in the 50cc and 500cc categories.
Barry was known for being outspoken in his criticism for what he considered to be dangerous race tracks, most notably, the Isle of Man TT course, which he considered too dangerous for world championship competition. He was a colourful, exuberant character who used his good looks, grin and London accent to good effect in self-promotion, and combined with an interest in business was one of the first riders to make a lot of money from endorsements. He is credited with boosting the appeal of motorcycle racing into the realm of the mass marketing media. He also tried his hand as a TV show host, including the ITV series Just Amazing!, where he interviewed people who had, through accident or design, achieved feats of daring and survival (including the former RAF air gunner, Nicholas Alkemade, who survived a fall of 18,000 feet without a parachute from a blazing Avro Lancaster bomber over Germany in March 1944). Sheene and his wife Stephanie also starred in the low-budget film Space Riders.