Posted by Howard Trott on Saturday, September 30, 2017 Under: Female Motorcycle Riders
In 1962 Beryl Swain had the world at her feet. She was a beautiful and ambitious motorcycle rider with a bright future. She should have had a pioneering racing career but sadly she was born at the wrong time. On target to become one of the leading female lights in the world of motor racing Swain was unstoppable, until a decision to revoke her licence broke her biker’s heart. 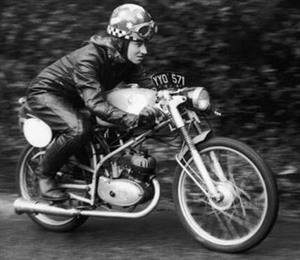 After a fruitless protest she hung up her leathers in the garden shed for the last time. Beryl Swain died in May 2007 taking with her one of the centuries most incredible stories of thwarted dreams. In 1952 Beryl Tolman met and fell in love with Eddie Swain, the owner of a motorcycle repair business.  This gave his new wife the opportunity to start racing. Beryl’s passion grew and grew and she soon became a competitor at both Brands Hatch and Snetterton, eventually finding her niche in the 50cc class.
In 1962 she became the first woman solo rider to ride the Isle of Man Tourist Trophy course in an official event, riding her Italian Itom 50cc Racer into 22nd place in a field of 25. Swain was hooked and shortly after crossing the finishing line she announced plans to return the following year. That was until the sport’s governing body, the FIM, revoked Swain’s international licence. Curator of social history for Manx National Heritage, Matthew Richardson, says the decision was a sign of the times. “Having a male racer injured or killed on the TT course was one thing, but the organisers were just not prepared to take the risk of that happening to a woman.

During the early sixties there was a feeling that the Isle of Man TT was too dangerous a race for solo women competitors.
Beryl actually tried to enlist the help of the Lieutenant Governor and despite gathering a lot of support for her cause, her license was never reinstated. Her resilience is admirable.  Swain was ahead of her time but really she was facing an uphill battle all the way. The sport was even more male dominated than it is today and it was a much more conservative time than we live in today. Many people supported the decision to ban Swain from competing in the TT.”
Just a decade later women were competing again in the TT and perhaps Swains' pioneering efforts somehow paved the way.