Posted by Howard Trott on Tuesday, April 5, 2016 Under: Motorcycle Couriers

Medical Sample Courier Manchester. Working as a motorcycle courier you get people contacting you with some odd transportation requests. I had a woman call me who wanted a hamster transported, couldn’t get a motorcycle helmet small enough for him so that was a no. A gentleman wanted fish transported, I had to explain to him that I ride a motorcycle so there would be nowhere to put them. I could of worn a goldfish bowl instead of a helmet but the fish would of blocked my view.

I stand corrected. You can get a motorcycle helmet for a hamster. 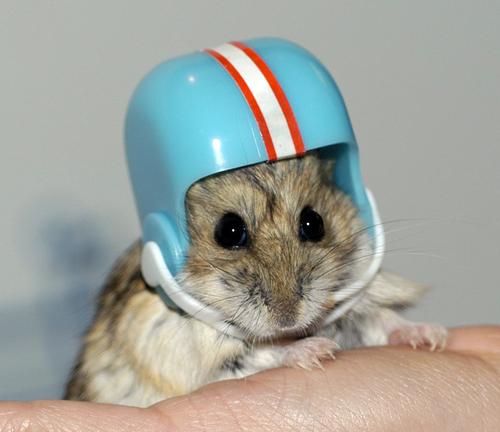 But seriously you do get some strange transportation requests. Had a normal call from a private hospital who we’ve done work for in the past. They wanted medical samples picking up and taken to a test centre, it was a straight forward pick up from Preston and delivered to Manchester. For transportation of medical samples I always use a specialised sample box, which is locked away in a backpack.

Arrived at my pick up point, there is no other smell like one from a hospital. I’ve never been a patient in one, touch wood and never want to be, picking up a consignment is enough time in one for me. Put the samples in the sample box, then placed it in the backpack, put it on and off I went. The roads were pretty clear so could lay on the power, watching for speed cameras and officers of the law. The motorway section was the same and got to Manchester in no time.

Manchester on the other hand was busy, I’ve rode through Manchester so many times I know most of the landmarks. Had the usual, motorists pulling out in front me, plenty of students using pedal power and plenty of them. My advice to anyone when approaching a lot of students on bikes is slow down. They are always talking and ride two or three abreast, probably been on the beer the night before and don’t know what planet they are on. They have a habit of changing direction without a hand signal. Manchester has the biggest student population in Europe and most of them ride bikes.

I’d never been to this medical centre but with a sat nav should be straight forward. Famous last words, arrived at my destination which was a huge hedge, rode to a gap in it and peered through, was looking at the medical centre. Rode on further and hung a right which brought me to a dead end. So back onto the road and took the next right. While looking for another right turn a dog decided to try and take a chunk out of my leg. I looked like a can-can dancer on a bike as I tried to get rid of him. He was determined and probably hadn’t been fed, so decided to lose the dog first which didn’t take long after speeding down the road. Must of been my lucky day, came to another right turn and a sign for the medical centre.

Pulled up outside a plush building which looked squeaky clean. Went to the reception and was pointed in the right direction. Came to the door that I wanted and knocked on, which was answered by an attractive woman which made up for the dog chase. She looked a bit like Katie Price but this one had a brain. She checked the samples and signed for them, job done. Back on my motorcycle and time to look for a cafe, needed a hot brew and a bacon buttie.