Posted by Howard Trott on Saturday, September 30, 2017 Under: Motorcycle Riding Skills
So is it legal and is it safe?
Let's deal with the legal aspect first. There is a very fine line between filtering and lane splitting or undertaking. The latter is an offence which could see you in court and walking away with points, a ban or even a custodial sentence if it was considered to be dangerous enough. 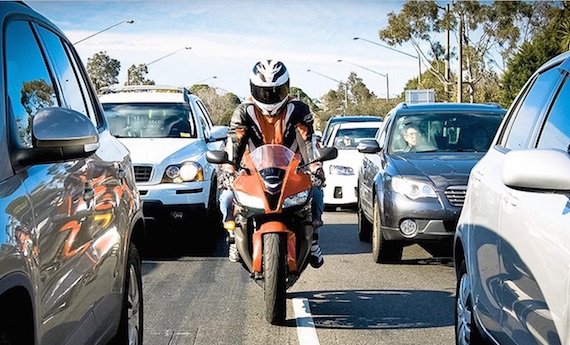 Whilst there are no clear definitions of what is acceptable and what is not, there are several sections in the Highway Code which refer to overtaking. Let's mention the places you must not overtake first.
You may not:
However, you may overtake vehicles where there is a solid white line on your side of the road if you can pass the vehicle without crossing or straddling the white line with any part of your vehicle.
You may:
Motorcycle Roadcraft explains that filtering is a form of overtaking to make progress past stationary or slow moving traffic but gives no real advice on where or where not to do it. You might be surprised to know that filtering is taught on basic training courses in congested areas and the DSA examiner will expect to see it applied on test if appropriate. Needless to say, as a courier in North West England, I do it all the time.
So what rules do we use for basic training? The prime rule is safety, both for the rider and for other road users who may not be expecting a motorcycle to appear from between queues. Watch out for pedestrians crossing the road or leaping from taxis or buses, and motorcyclists and cyclists weaving through the traffic.
When passing stationary traffic on a single carriageway road, it is generally safer to move into the opposite carriageway if possible, and to move back when confronted by oncoming traffic or when further progress cannot be safely made. Filtering may take place against oncoming traffic provided there is a sufficient safety margin - if necessary slow down. Don't forget that you should never force another vehicle to swerve or slow down - if you are seen to do so, this could count as grounds for a prosecution. Watch out for junctions, where cars can turn across you, or turn right from beside you - only filter past them when you have a good view.

Don't forget it is perfectly legal to use bus lanes when they are not in use - check the sign boards at the beginning of the lane - but do so care as someone else may suddenly get the same idea. Avoid filtering up the left of traffic next to the kerb- drivers are simply not looking for you, and are even more likely to turn left without signalling. Passing between traffic queuing in lanes is usually relatively safe but expect vehicles to change lane from either side of you, and watch out for motorcycles and cycles weaving in and out.On a dual carriageway with three lanes, between lane 2 and lane 3 is usually the best bet. Lorries are not allowed to use the outside lane so you have more space and a better view. In addition you are less likely to be sideswiped by vehicles changing lanes at or near junctions. On the other hand you have more danger from impatient car drivers swapping lanes without warning. Be very careful when one lane stops altogether and adjust your speed to that lane - someone WILL try to swing into a gap in the moving lane!
Keep your speed down whilst filtering - in slow moving traffic my rule of thumb is never to go faster than a speed that allows me to stop if the car in front suddenly opens its door or pulls a U turn. This is generally no more than around 10-15mph faster than the traffic I am passing. If traffic starts to move much over over 50% of the speed limit (eg. at around 40mph on a national limit dual carriageway), I usually return to the lane.
Be ready to use the horn, and use your headlight - consider using main beam - it's technically illegal but gives you a much better chance of being seen. Plan ahead - look for obstructions like traffic islands, bollards, side roads where vehicles might emerge or turn across your path, look for spaces to move back into the queue, and look to make eye contact with drivers if you need to move back into a gap. Watch traffic light sequences so that you can plan whether you can slip to the front whilst they are red or need to look for a gap in the queue into which to move when the lights change.

Watch for potholes, painted lines or slippery surfaces that could make braking or steering difficult. Watch for width restrictions, cars waiting to turn right or cycles that might squeeze lanes together. Be careful passing lorries and buses - not only do they need space to turn at junctions or on sharp corners and may cut across your path, don't forget your view past them is also very restricted and they cannot see you if you cannot see the driver in his mirrors. Treat an apparent gap in the traffic with caution, particularly if the queue in front of the stationary vehicle is moving - you can almost guarantee the driver is letting someone out from a side road or to turn into the side road from the opposite direction.
Don't forget, you may not pass to the right of a keep left sign or enter a cycle lane (if bounded by a solid line), bus lane (check the times it is active) or tram lane. Nor should you cross the solid white stop line at traffic lights - in practice doing so gives you the edge on making a clean getaway. Passing in cross hatching with a broken boundary is allowable if "safe and necessary". Unfortunately your idea of necessary may not be the same as the policeman's!
Be careful about moving back and forth to the fastest moving lane on a multilane road to make progress in heavy traffic. A traffic policeman friend on a training course was shown a video of a motorcyclist moving at speed from lane to lane on a busy motorway and asked for comments. He suggested that he was riding safely even if not strictly within the letter of the law and that he had no problem with what he saw - he was surprised to be told that the rider had been prosecuted successfully for dangerous driving and banned! I regularly see riders weaving in and out of traffic at 80 or 90mph on the M25 - aside from the likelihood of getting a pull, the chances of avoiding a car suddenly changing lane are virtually zero! Using the hard shoulder to pass stationary traffic on a motorway is illegal.
Be careful about using a lane which has a "turn left" or "turn right" arrow in it to make progress past stationary or slow moving traffic. Although it is not technically illegal to return the straight ahead lane at the end of it, many police will take a dim view. Likewise, exercise caution when making a turn from a lane marked with a straight ahead arrow.
What do you do when baulked by a lane hog? Well, the bad news is passing on the left is can constitute 'dangerous' or 'reckless' driving in the opinion of the policeman. This can get anything from 3-6 points on the licence to a custodial sentence! Don't sit a metre off his back bumper with main beam on either. Generally a position to the offside of the car will make you visible in the rear view and driver's door mirror and given time and perhaps a flash of main beam, they will generally spot you and move over. Don't just blast by - give a them a "thank you" wave.... it makes it more likely they will do the same for another rider in the future.
Be courteous to other road users. Don't harass or hassle them - most or doing their best (even if it may not be very good) and many drivers do not like driving in traffic and are nervous enough without having a bike apparently trying to join them in the driver's seat. An impatient, aggressive motorcyclist can easily distract them or cause them to make a mistake. Don't forget that a highly manoeuvrable bike weaving through stationary traffic is also high on the hate list of aggressive car drivers - you will meet the odd one who will try to take you out!!
Go with local practice - trying the same filtering techniques that you use on the Euston Road in London in a small Scottish village is asking for trouble, because no one will be on the lookout for you.
In general you can assume that a traffic policeman will know both the letter of the Highway Code and motoring law and the spirit of it too, will quite possibly be a biker himself, and will give you credit for riding sensibly, but ride like a prat and you'll get your wrists slapped. Panda car drivers will often only have a sketchy knowledge of what's legal and what isn't, whilst a foot plod will usually know almost nothing - to them almost everything you do on a bike looks dangerous, and don't forget in court it's usually your word against the policeman's! If you get that far, unless you have a very good (read expensive) brief, it's game over - the magistrate will believe the copper's every word.
Finally, if you are not confident you can do it, don't! You might be capable of dealing with your home town's traffic problems but London in particular is another kettle of fish! It might take you a little longer to reach your destination, but it's better to arrive on the bike than in the air ambulance.
In conclusion, the best traffic filterers take no chances, but make good progress by combining excellent observation with careful planning. Looking as far ahead as possible will allow you to spot potential bottlenecks and allow you to get into the best position to deal with them. Always remember advanced techniques of machine control can only increase your safety and reduce the risk of an accident if they are supported by positive attitudes, concentration, critical self-awareness and above all, by self-control. Safety must remain your primary and overriding concern when considering any of these techniques.

Tags: motorcycle riding skills  filtering through traffic
« Back to posts