It was by a series of happy coincidences that the Harley family moved from Manchester, England and the Davidsons from Scotland both emigrated to North America in the late 19th century, and settled in Milwaukee. And that two of their sons, Bill Harley and Arthur Davidson, should end up working at the same engineering establishment, became firm friends, and began experimentation with the internal combustion engine. Arthur was the outgoing one, a patternmaker who developed into a natural salesman. Bill Harley was more the technician, a draughtsman who designed not only the first Harley-Davidson but a whole generation of them.

Arthur had two brothers : Walter was a machinist by trade who helped build the first machines, though he soon took responsibility for the administration and became the first ever president of Harley-Davidson Inc. William, the eldest Davidson, came in later, an experienced toolmaker and foreman, he was the obvious choice for works manager in the rapidly expanding factory. There were four founder members of Harley-Davidson and the fact they succeeded where countless others failed was down to basic character traits that were to stand them in good stead in the turbulent years to come, those of practicality, common sense and innate caution. 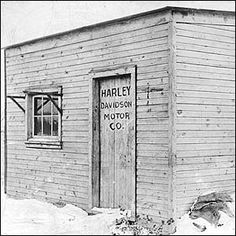