Hesketh, the new British superbike was announced to a delighted press and public in April 1980. They were delighted because deep down almost everyone wanted to see a new British superbike. There were one or two sceptics, such as the national daily which described the new V-twin as just another folly of the English aristocracy, but they were the minority. Two years later when the whole enterprise collapsed in a highly public and embarrassing manner, there were no shortage of critics.

It was something out of a novel, the plump Lord Hesketh had inherited the family seat at the age of five. At 23, he was running a successful Formula One racing team, now he was going to build a bike to beat the world. As the plot was revealed so the more promising it seemed. The Hesketh V1000 was to be a one-litre V-twin, full of character relatively light and simple by eighties standards but with all the modern conveniences of a luxury superbike. Engine design was to be by Westlake, well known for its race winning speedway singles, with styling by John Mockett. They were aiming according to Hesketh at a two wheeled Aston Martin, fast, superbly made and of course all British.

So it was a great pity when everything went wrong. When the V1000 eventually went into production the press reports were very different. On bikes intended for sale as opposed to those carefully assembled prototypes the gear change was slow, clanky and obstructive and there was bad transmission snatch. Even worse the engine, the beautiful 90 degree V-twin with its four valve heads and racing heritage lacked torque at low revs and rattled like two skeletons in a dustbin as one road tester put it. After around 170 bikes had been built the receivers called a halt though Lord Hesketh did buy back sufficient tooling to maintain production in a very small way back at the family seat at Easton Neston. 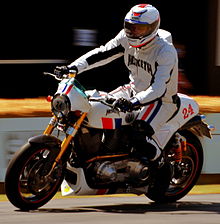