Posted by Howard Trott on Thursday, December 1, 2016 Under: Austrian Motorcycles
The most successful Austrian manufacturers began with 98cc Rotax-powered machines and went on to produce mopeds, scooters and lightweights with Puch, Sachs, as well as Rotax engines, all two-strokes. KTM went through phases, concentrating solely on mopeds in 1960-65, and from 1967 began to develop motocross motorcycles which came to dominate its production. 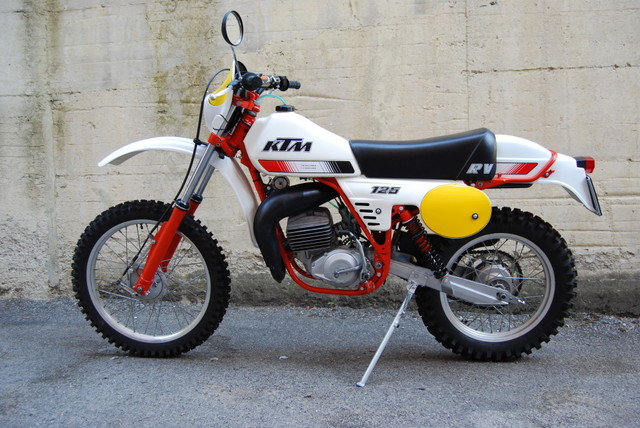 Won the 1977 250cc Motorcross Championship, and experience gained from the competition bikes trickled down to the production machines, resulting in water-cooling and rising-rate rear suspension. After near-bankruptcy in 1991, KTM made a rapid recovery, and now produces a large range of off-road machines, from a 125cc two-stroke trail bike bike to more serious Enduros. Some of these are road-legal and have electric start.

Another recent development has been a return of the pure road market with the LC4 Supermoto and the 625cc Duke, the magazine testers favourite for wheelies and stoppies. Although there were rumours of a merger and takeover in 1998 ( notably by Harley-Davidson ) KTM remains independant, is profitable, and is now developing new motorcycles.