Posted by Howard Trott on Thursday, July 13, 2017 Under: Motorcycle Couriers
At the end of the First World War in 1918, many British Army motorcycle despatch riders of the Royal Corps of Signals were demobilised and found employment difficult to come by. As a result, they purchased military surplus motorcycles, and began couriering in central London. Following WWII increasing urban congestion in London saw riders on small motorcycles making scheduled runs with artwork or copy between printers to and from advertising agencies or newspapers. 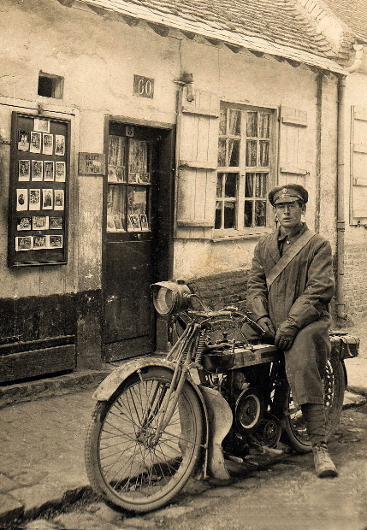 In London radio controlled messengers became especially popular following the 1971 Royal Mail strike when motorcycles were fitted with bulky mini-cabs radio. In London businesses were pleased with the results and the courier industry took off from the mid-1970s.

Pioneers in London included Yellow Express, GLH, Mercury Despatch, Addison Lee, Security Despatch and City of London Courier Company. By this time Motorola bleepers as well as handheld radios independent of the motorcycle's battery were in widespread use.

The advent of bicycle couriers and the fax machine in the mid-1980s, as well as appropriate insurance and e-mail in the 1990s saw an end to the high-earning boom years of the early 80s for London's motorcycle couriers. However, in the congested cities and capitals of many developing countries, motorcycle couriers are as popular as ever for urban deliveries.
Types of motorcycle couriers
There are two main types of motorcycle courier: those working for a courier company on an open circuit with a radio or bleeper, rather like minicabs. Earnings depend on the volume of work and the size of the fleet, and up to a point the speed and street knowledge of the rider. With the greater distances covered in this sort of work, the expenses in running the machine can account for at least 20% of earnings.

The other type of courier is an 'in-house' messenger working for news agency for a set wage and on set hours. Such couriers usually stay in the city centre and ride to and from the same places. Running expenses are much reduced, but so is the unpredictable nature of the open circuit. Most motorcycle couriers on the open circuit tend to use machines no bigger than 600cc, which are light and economical in town but adequate enough for occasional long distance work.