Posted by Howard Trott on Tuesday, July 25, 2017 Under: Motorcycle Rides In America
Tail of the Dragon (Tennessee) 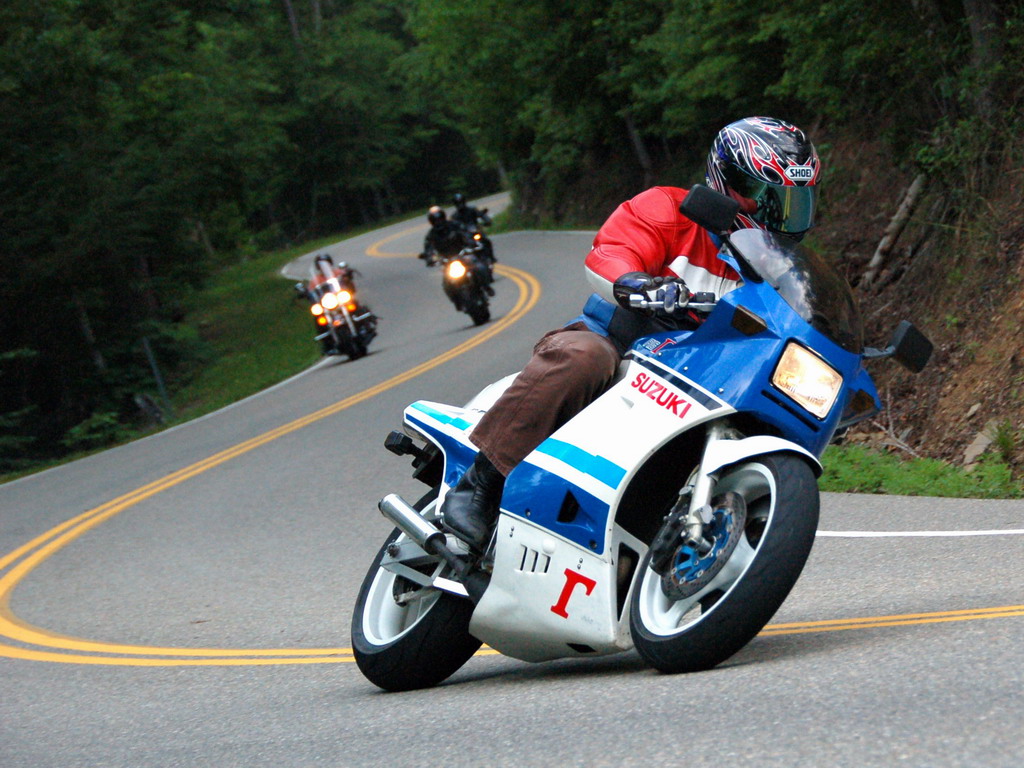 An 11-mile stretch of US Route 129, the Dragon (also known as Deal’s Gap) is widely considered to be one of the best motorcycle roads in America. Resembling a dragon’s tail, Deal’s Gap is said to contain over 300 curves, the sharpest of which has been given nicknames such as Gravity Cavity and Copperhead Corner. The challenging two-lane blacktop-highway stretch brings riders through Great Smoky Mountains National Park. Originally 55 mph, the speed limit was reduced to 35 in 2005.
A shrine dubbed the Tree of Shame has motorcycle parts attached to it by those who weren’t able to tame the dragon.
Cherohala Skyway (Tennessee and North Carolina) 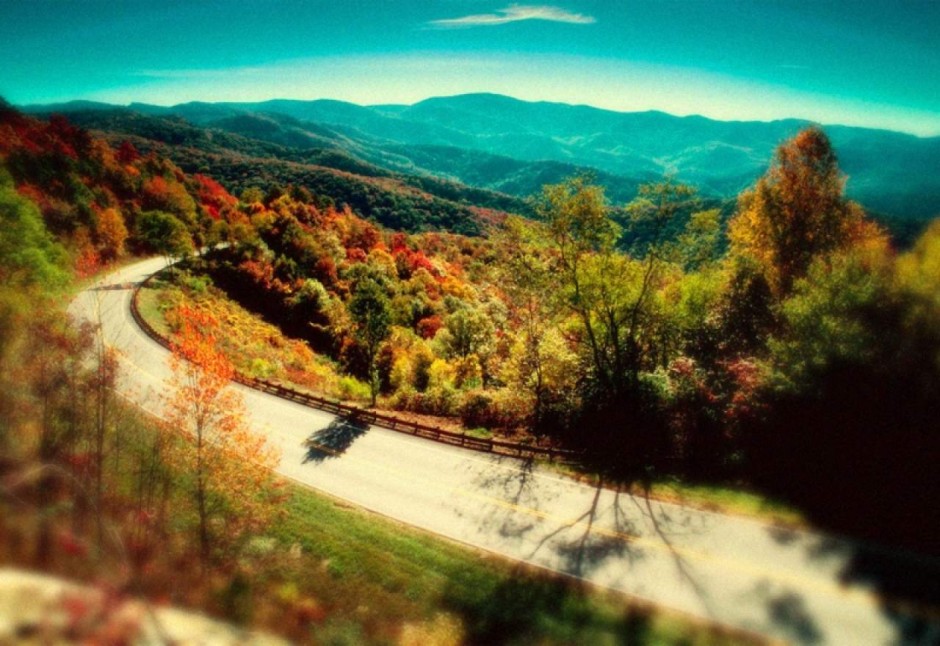 Cherohala Skyway, also known as Overhill Skyway, is a National Scenic Byway that stretches 43 miles from Tellico Plains to Robinville. The road runs through both the Cherokee National Forest and the Nantahala National Forest (the road’s name is a portmanteau of Cherokee and Nantahala). It reaches elevations of over 5,400 feet, and with many sweeping curves and very little traffic at night, the road can be especially dangerous in the winter. The byway provides access to several viewpoints, recreational areas, and vistas.
Twisted Sisters (Texas) 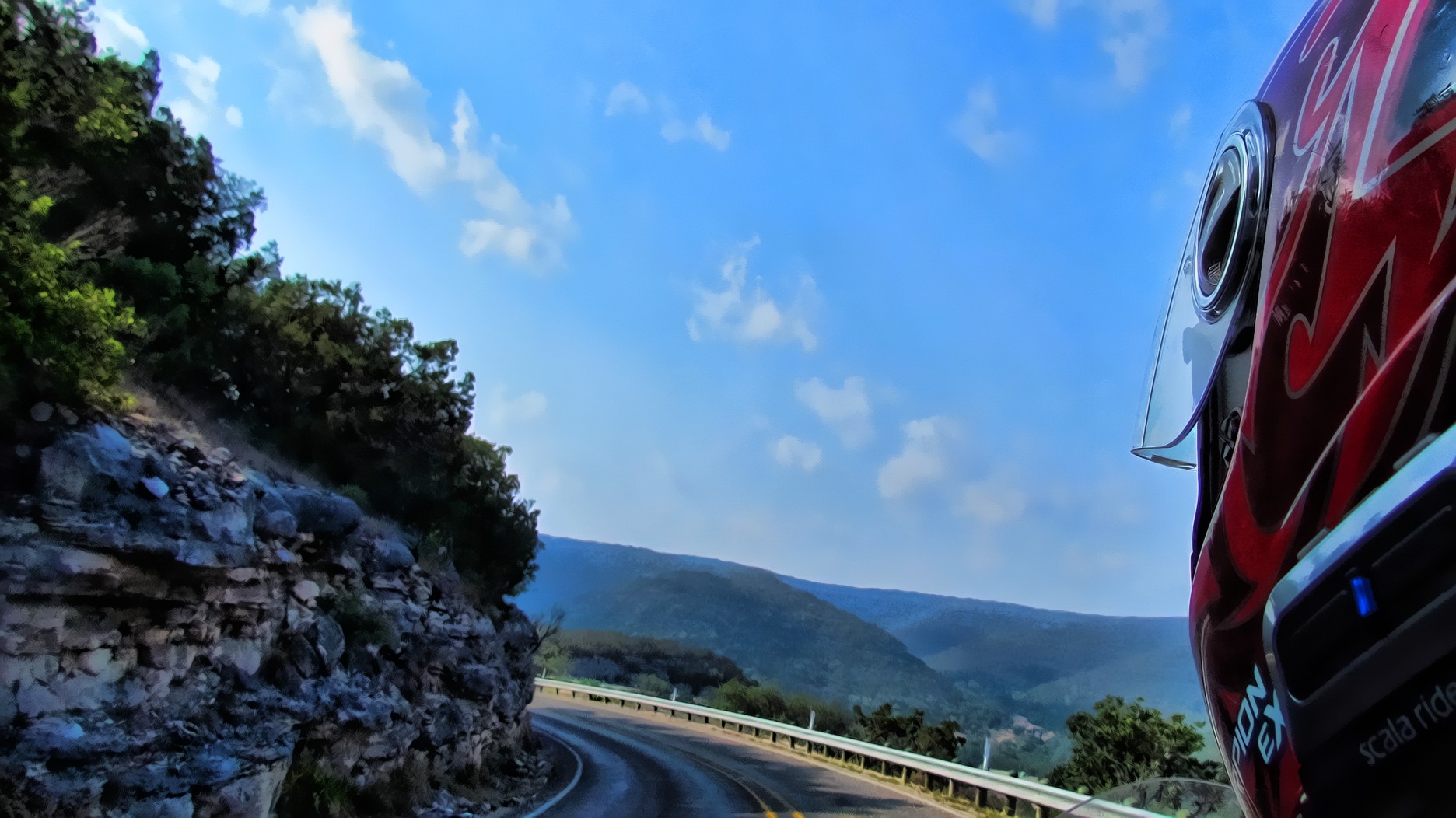 A grouping of great motorcycle roads, Ranch Roads 335, 336, and 337 in the Texas Hill Country are nicknamed the Twisted Sisters. While they don’t possess the level of difficulty of the Tail of the Dragon, the roads aren’t meant for amateur riders. The Twisted Sisters take riders through a 100-mile loop of Texas ranches, valleys, and hills. Providing panoramic views, they curve around canyons and rises with few guardrails. One 15-mile stretch is said to have about 65 curves. Within and nearby the loop, several roadside attractions can be visited — the Lone Star Motorcycle Museum, Stonehenge II, Frio Canyon Motorcycle Stop, and Lost Maples State Natural Area are all notable stops.
Blue Ridge Parkway (Virginia and North Carolina) 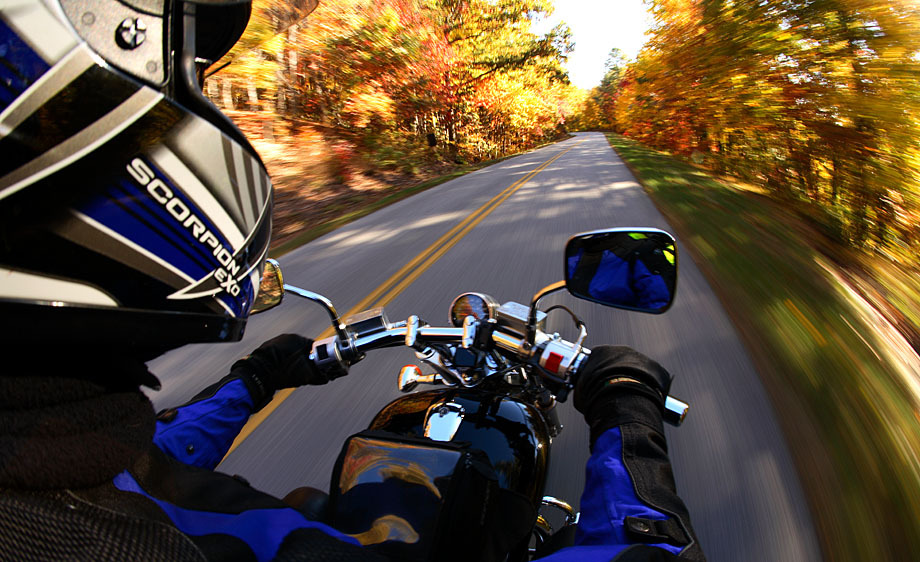 469 miles in length, the Blue Ridge Parkway spans 29 Virginia and North Carolina counties alongside the Blue Ridge Mountains. Top speed on the Blue Ridge Parkway is 45 mph due to the numerous sharp curves and elevation changes. The parkway can be ridden in one day, although two days are typically recommended. There are no gas stations on the parkway itself — you have to exit in order to fill up. As the elevation changes throughout, riders will notice the trees change from oak and hickory to conifers. Many trees are permanently contorted due to the constant winds in several areas around ridges and passes.
Beartooth Highway (Montana and Wyoming) 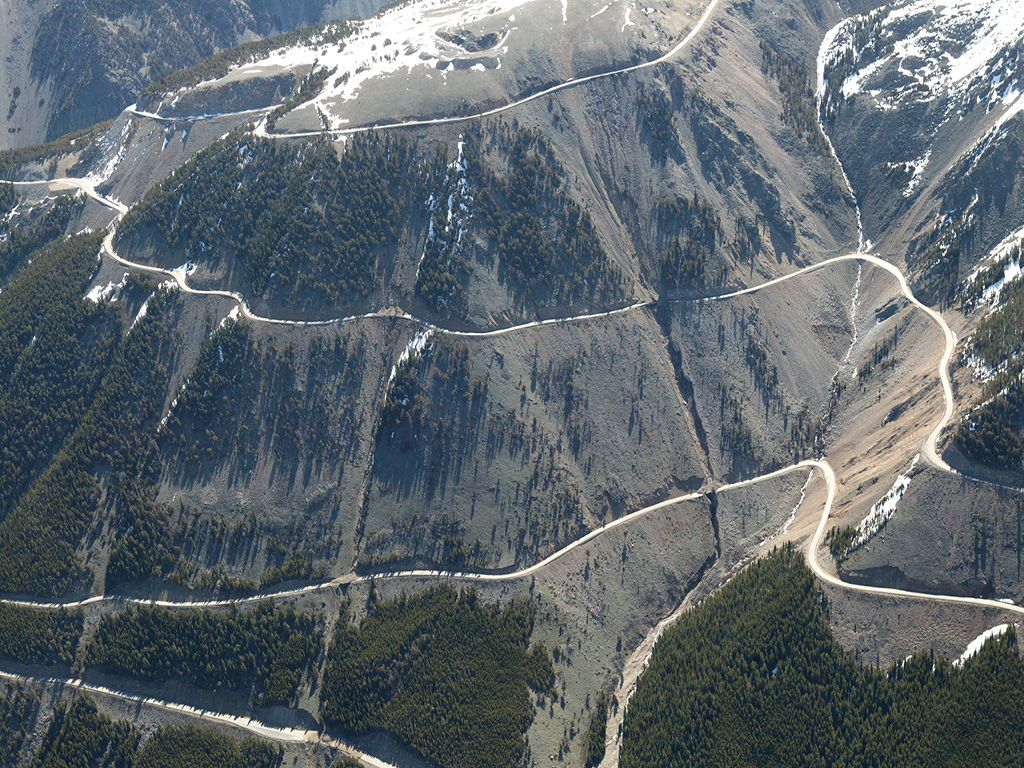 Beartooth Highway (a section of US Route 212) is a stretch of road between Red Lodge and Cooke City, Montana. A steep road consisting of many zigzags and switchbacks, it brings riders to an elevation of 10,947 feet at Beartooth Pass. The 69-mile highway is typically only open from mid-May to mid-October, and along the short route riders twist through rocky mountains, glaciers, and wildflower-laden alpine meadows. Well known for its thunderstorms and heavy winds, Beartooth Highway has even seen snowstorms during the summertime.
Pacific Coast Highway (California) 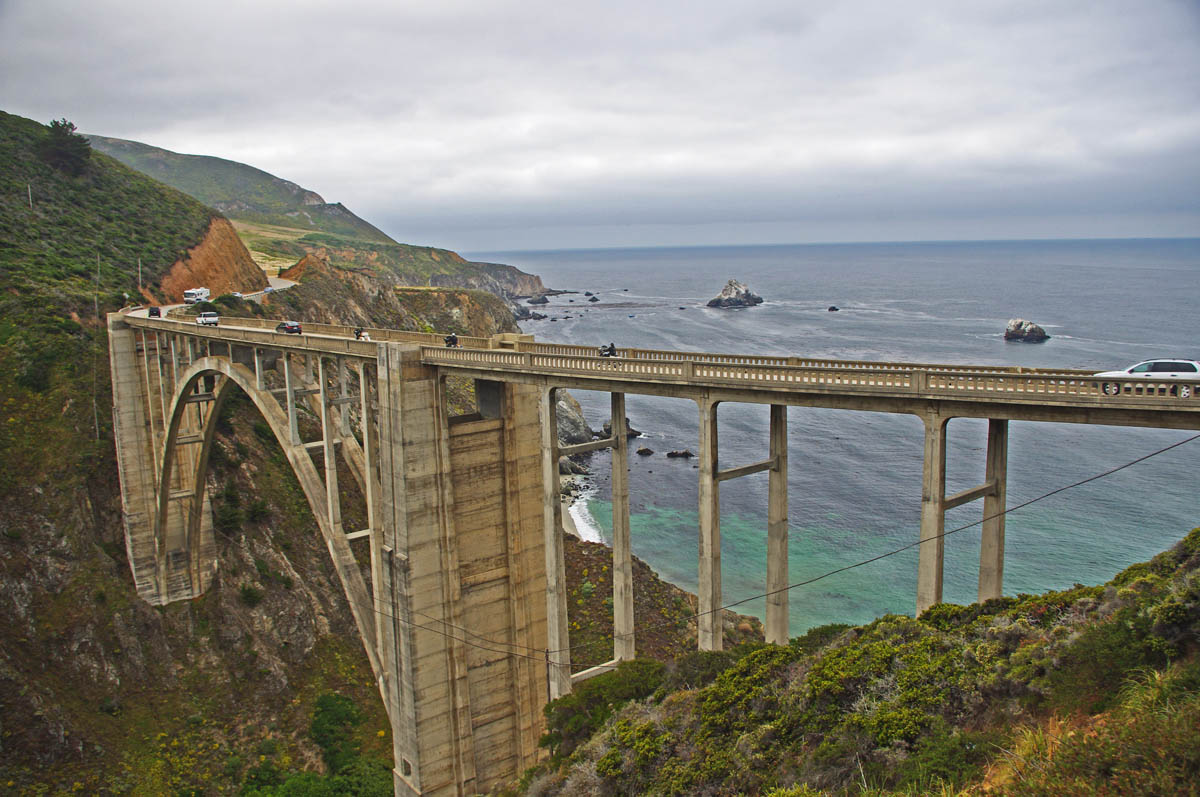 The Pacific Coast Highway, or California State Route 1, is widely considered to be one of the most beautiful motorcycle roads in America. While the PCH stretches from Orange County to Mendocino County, the most notable part of the ride runs through Big Sur. As the name suggests, the 123-mile portion of the PCH hugs rugged cliffs around central California’s coastline. With sharp drop-offs, hairpin turns, and heavy fog on the two-lane highway, the PCH demands that riders keep their eyes on the road, despite the distracting scenes of redwoods, crashing waves, and million-dollar mansions.
Skyline Drive (Georgia) 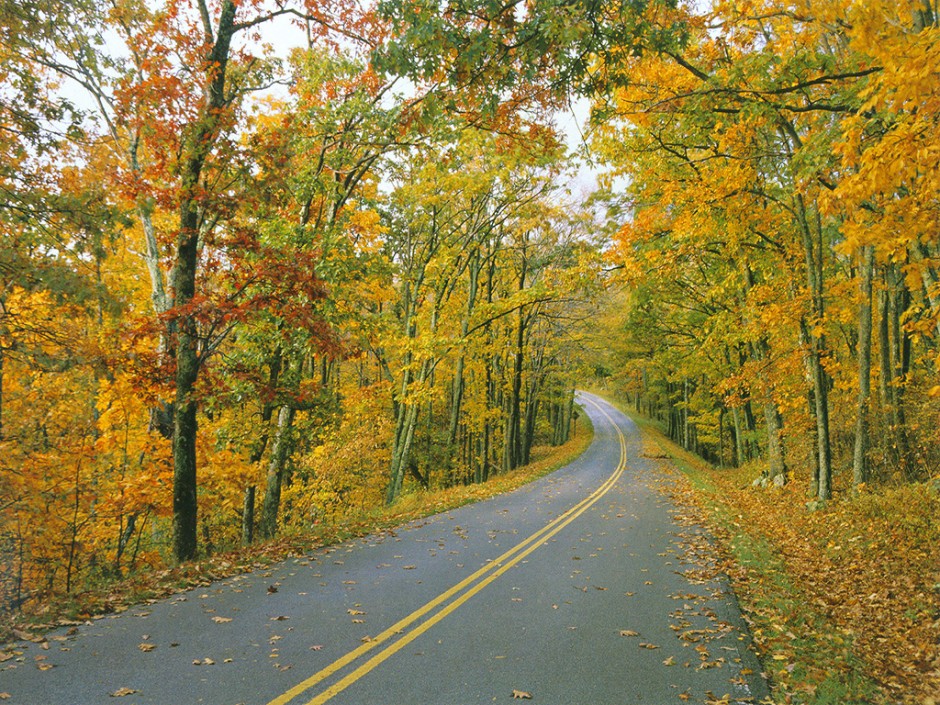 With 75 overlooks peering out into the Shenandoah Valley to the east and the Piedmont to the west, Skyline Drive attracts over two million visitors annually. Most popular in the fall due to the changing leaves, this National Scenic Byway has a speed limit of 35 mph on account of the traffic, curves, and wildlife. White-tailed deer, black bears, and wild turkey are frequently sighted on the road. Skyline Drive is 105 miles long and runs north to south as the only public road through Shenandoah National Park. The park, in which roadsides are intentionally left unmowed so wildflowers can grow year-round, is known to have one of the densest black bear populations in the United States.
Pig Trail Scenic Byway (Arkansas) 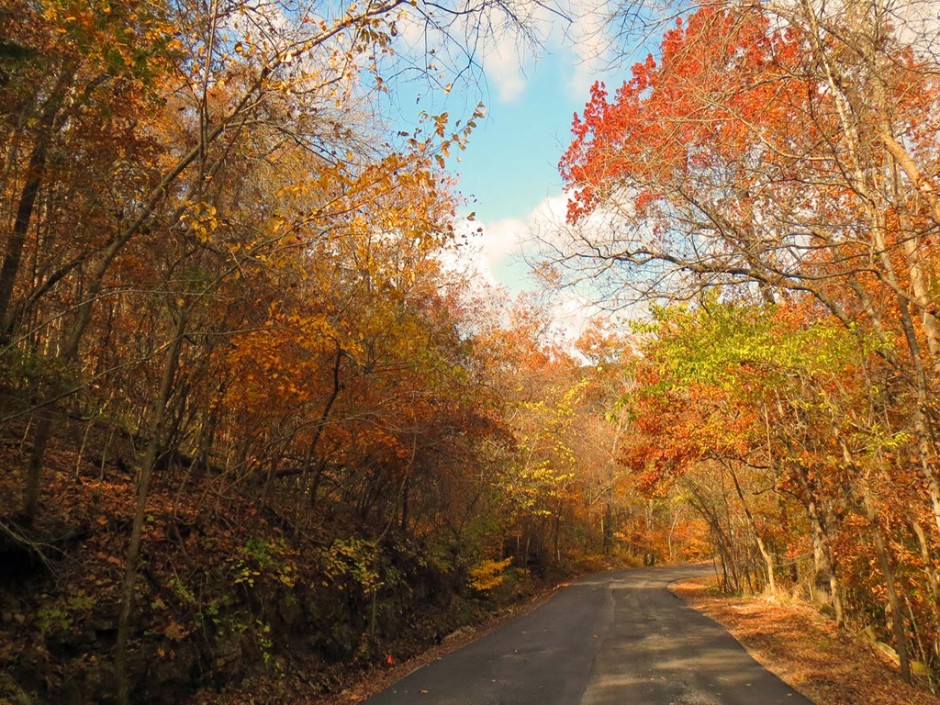 The Pig Trail, a 19-mile portion of Arkansas Highway 23, is a scenic byway of steep hills, drop-offs, and switchbacks cutting through Ozark National Forest. The road is variously said to have been named after the University of Arkansas football team, the resemblance between the road’s curves and a pig’s tail, and the hogs that roam the area — the true origin remains unclear. Running along the heavily wooded Boston Mountains, the Pig Trail additionally provides access to recreational activities, including whitewater rafting, kayaking, and camping. The road is popular in the spring and fall, when wildflowers bloom and leaves turn to autumn colours, respectively.
San Juan Skyway (Colorado) 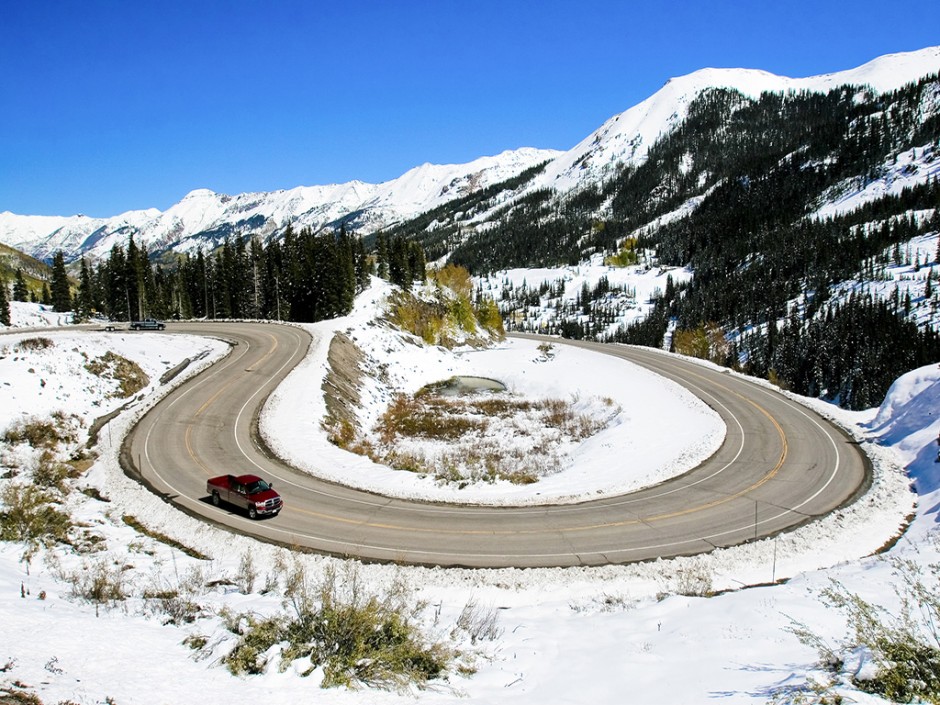 Having earned its place as an All-American Road, the San Juan Skyway is a scenic 233-mile route through the San Juan Mountains in southwest Colorado. The looping road brings riders through historic mining camps, ski resorts (including Telluride), and national parks. The San Juan Skyway requires care due to drop-offs, S-curves, and constant ascents and descents. Many ghost towns can be viewed from above as the road climbs to over 11,000 feet at the summit of Red Mountain Pass. The Million Dollar Highway section of the road is particularly scenic — mountain goats, black bears, and mule deer can be spotted amongst the waterfalls, gorges, and mountain peaks.
Natchez Trace Parkway (Tennessee) 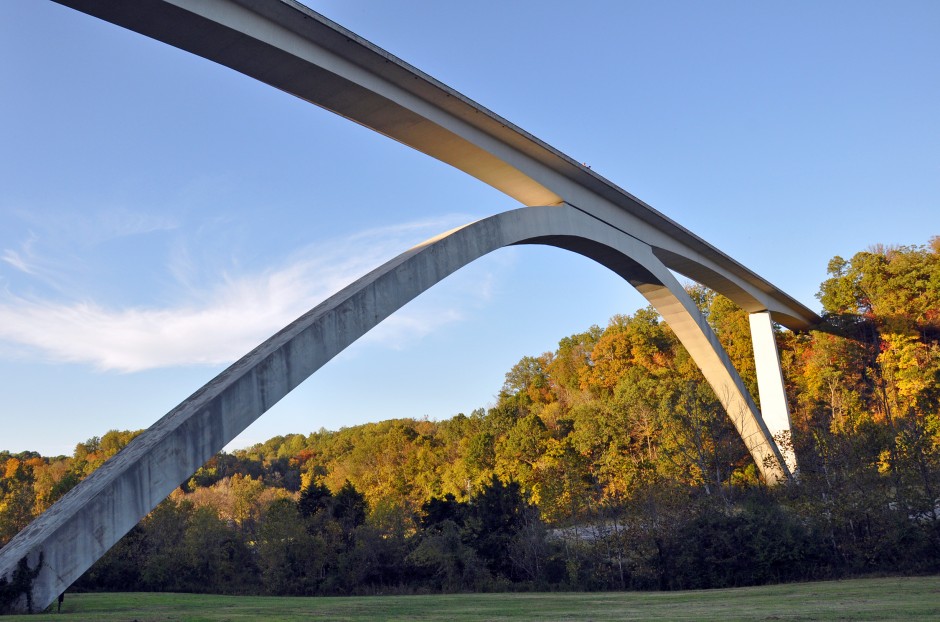 The Natchez Trace Parkway offers riders 444 miles of scenery and 10,000 years of North American history. The Natchez Trace footpath was originally traversed by Native Americans hunting American bison. The two-lane parkway, which prohibits commercial traffic, has a speed limit of 50 mph, and the journey typically spans two days but can be covered in one. Throughout the ride on the parkway, riders zoom past ghost towns, Spanish moss hanging from trees, and Civil War battlegrounds.
Going-to-the-Sun Road (Montana)

The only road that cuts through Montana’s Glacier National Park, Going-to-the-Sun stretches approximately 50 miles. In 2014, the often-snow-covered road isn’t scheduled to open in its entirety until June 20th at the earliest. It takes nearly 10 weeks to plough (and sometimes must be ploughed several times). The ride lasts roughly two hours without stops, and five of Glacier National Park’s campgrounds are located along the road.
Tunnel of Trees (Michigan) 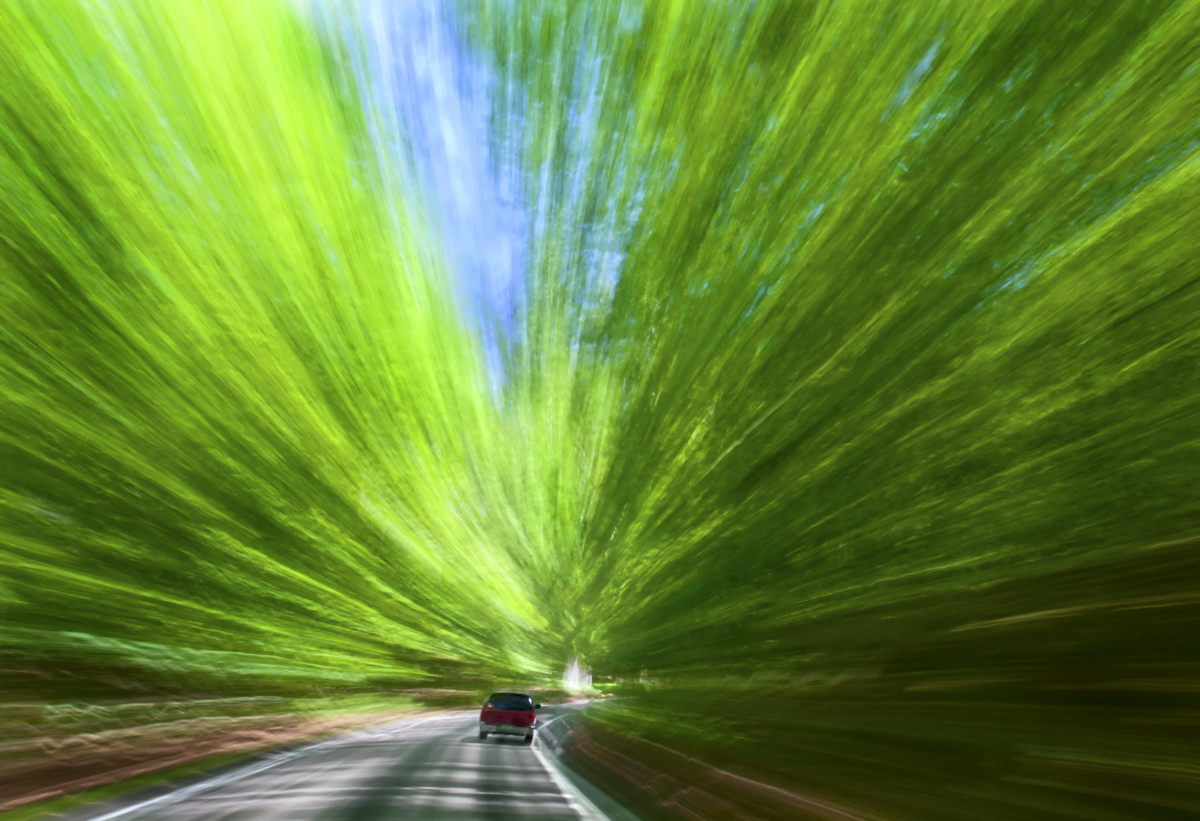 A portion of Michigan’s 27.5-mile M-119, the Tunnel of Trees (as the name suggests) is a scenic road surrounded by heavy foliage. The Tunnel of Trees notably lacks a centre line. It’s popular in the autumn when the canopy changes colours, and openings in the trees provide for scenes of Lake Michigan. The area was once inhabited by the Ottawa Indians, as well as trappers, traders, and loggers. The Tunnel of Trees Scenic Heritage Route is a popular tourist attraction in the area.

In : Motorcycle Rides In America