Motorcycles in the military

Posted by Alan Liptrot on Monday, May 14, 2018 Under: Guest Motorcycle Articles
The speed and manoeuvrability of motorbikes has been a huge asset to armed forces throughout the world, with Harley-Davidson, Triumph and BMW all playing their part. 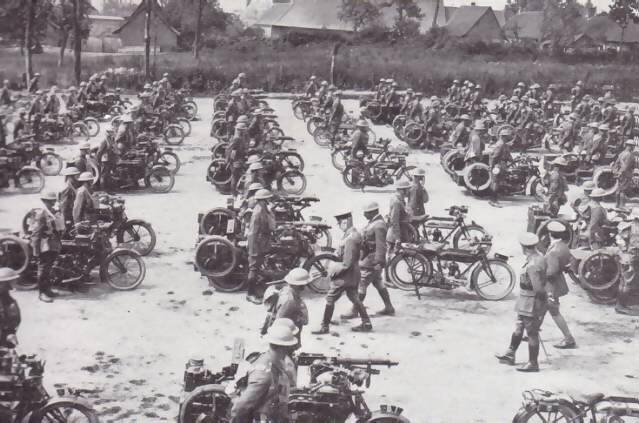 The other day, I took the chance to watch again that fantastic movie ‘The Great Escape’. As I watched Bud Ekins take the place of Steve McQueen, to jump the wire fence on his Triumph, I began to wonder about the role of the motorcycle during wartime, so I did a little reading and was surprised to find that motorcycles have played a huge part in military history. Being able to go where other vehicles couldn’t, they became the modern day horses, with one great advantage; some bikes, such as the Enfield ‘Flying Flea’ or ‘Airborne’ as it was also known, could be parachuted from an aeroplane along with troops.
Royal Enfield also supplied motorbikes to the British Armed Forces in World War 1, with machine gun-carrying combinations and stretcher-bearing motorcycles being made on demand. The company even won a contract to supply motorbikes to the Russians, and when most able bodied men were at war in Europe, a police force made up of women was issued with 600cc motorcycles.
The Germans weren’t slow in seeing the practicality of using two wheeled transport. BMW motorcycles were to prove invaluable in North Africa during World War 2. Not having a chain that could clog with sand, they were so successful that Harley-Davidson were requested by the US military to copy the machine, which they duly did and produced the Harley-Davidson XA. With the German war machine insatiable for motorcycles, BMW flourished during the war years.
The American Army have been using motorcycles since 1913, with a third of all Harley-Davidson machines being produced for the military in 1917. In the Second World War the company produced 30,000 bikes for the Russians and also built machines for the Canadians. A total of 90,000 motorcycles were produced during the conflict. The Indian Motorcycle Company also produced machines such as the ‘Scout’ and ‘Chief’ during the war years, but weren’t able to replace Harley Davidson as the motorcycle of choice.
In Britain, the First World War provided work for the Triumph factory as production was concentrated on the war effort. More than 30,000 motorcycles, including the ‘Model H Roadster’ were turned over to the military. In World War 2, the Triumph factory was laid to waste by German bombs, along with most of Coventry, so production moved to a site near Meriden, also in the West Midlands area of England. Apart from building some 50,000 motorbikes during the war, Triumph also produced aircraft components.
In 1950, the North Koreans, backed by China, were able to deploy a ‘Motorcycle Reconnaissance’ unit equipped with home produced bikes. Vietnam also saw the use of the military motorcycle, with ‘Special Forces’ employing motorbikes during that ill-fated conflict. In 1988, Vietnam Veterans took to the streets of Washington D.C. to create a two-wheeled convoy known as ‘Rolling Thunder’, in order to raise awareness of the suffering of the soldiers who did not return from the war. This has developed into an annual pilgrimage to the ‘Vietnam Veterans Memorial’.
‘Operation Desert Storm’ in 1991 again saw the deployment of motorcycles, and more recently, the manoeuvrability of two-wheeled transport proved invaluable in Afghanistan and Iraq. When the road ends, the motorcycle keeps on going. When the road doesn’t end, the speed of a motorcycle is unchallenged. Accessibility and versatility have been key words associated with the role of military motorcycles since the outset.
Now back to Steve McQueen, who was frowned upon by his bosses at the studio for spilling the beans about his stunt double, during ‘The Johnny Carson Show’. When Johnny congratulated Steve on the motorcycle jump, Steve didn’t hesitate in putting the record straight. It wasn’t that Steve McQueen couldn’t ride a bike, quite the contrary. In the scenes before the jump, he rode his own bike as Virgil Hilts, but the German riders couldn’t keep pace with him, so wearing a German uniform, he took the role of a pursuing German, and through the magic of film editing, chased himself. So the next time you get the chance to see ‘The Great Escape’, look out for Steve McQueen chasing Steve McQueen. The motorcycle chase was actually McQueen’s idea. The original script had Virgil Hilts attempting to escape by train, but when McQueen said to his director ‘Hey John, I’ve got an idea that will put more juice into this, a small piece of movie and motorcycle history was born.

Tags: motorcycles in the military
« Back to posts