Posted by Alan Liptrot on Tuesday, June 26, 2018 Under: British Motorcycles
James Lansdowne Norton, the father of the company, began the story in 1898 with a factory that made cycle chains in Birmingham, UK, but by 1902 he was importing engines from Switzerland and France. 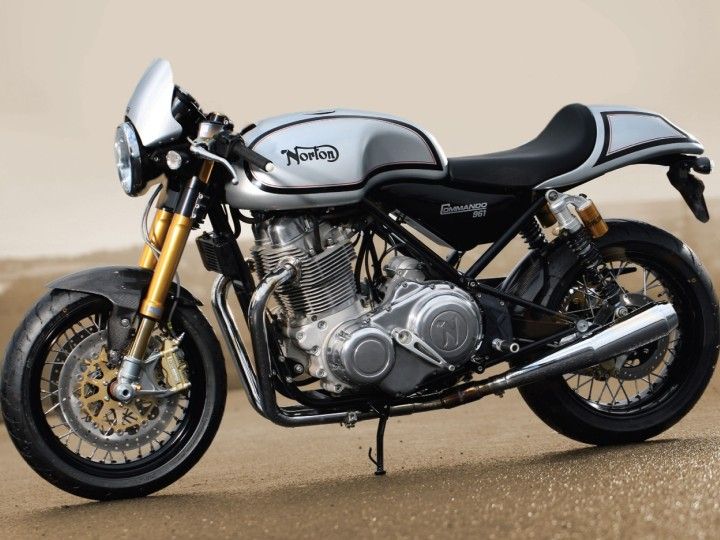 To create his own motorcycles, and success followed quickly with a Norton ridden by Rem Fowler winning the twin-cylinder class at the first Isle of Man TT race. This was the start of Norton's long lasting love affair with racing, which didn't end until the 1960's. The prize that everyone coveted was the 'Isle of Man Senior TT''; a race that Norton's went on to win ever year from 1947 to 1954 to add to their ten titles claimed between the wars. Norton built their own side-valve, single engine in 1908, which served them well until the 1950's.
However, after a solid start, the business saw a downturn and faced extinction, only to be saved by R.T.Shelley & Company who created Norton Motors. James Norton became a director of the company, but sadly died at the young age of 56 in 1925, but not before he saw his motorbikes win the Isle of Man TT Senior and Sidecar categories in 1924. Walter Moore designed the CS1 engine in 1927, but left the company for NSU in 1930, leaving Arthur Carroll to come up with a completely new OHC engine which was to become the bedrock of future OHC and DOHC singles. Norton had been buying Sturmey Archer gearboxes and clutches, but when the company discontinued production in 1934, Norton purchased the design rights and asked Burman, a gearbox manufacturing company, to pick up the reins.
After the Second World War, Norton needed to pick up production, so began introducing more models, with the Norton Dominator 500 appearing in 1949. However, the marque's mastery in racing was being challenged by AJS (who won the first World Championship) and multi-cylinder Italian models. In that premier World Championship year, Norton only managed fifth place. In 1950, the McCandless brothers of Belfast developed the 'Featherbed' frame, which shot Norton back to the top again. The Dominator took on the 'Featherbed' frame in 1951 and success on the race track transferred to the public sector, but despite this, Norton found itself in financial difficulties and in 1953 was purchased by Associated Motorcycles, who also owned AJS and Matchless. Sadly the factory in Birmingham closed in 1962 when production was moved to Woolwich in London. A silver lining to this development manifested itself in the shape of a new, better version of the Norton gearbox which was used on all of the larger models under the AMC banner and in 1955, the Dominator 99, powered by a 600cc engine, was added to the catalogue.
By 1960, a new version of the 'Featherbed' had arrived on the scene which accommodated shorter riders. The altered upper frame rails made the bike slimmer and reduced the width between the rider's knees. This frame was to become known as the 'Slimline' and the original, the 'Wideline'. In 1961, a 650cc Manxman was offered to the American market and a year later the Norton 650SS and Atlas 750 were introduced in Britain.
The Japanese invasion in the 1960's hit Norton, hard, along with the rest of the British motorcycle industry, leading to the failure of AMC in 1966. The fledgling company of 'Norton-Villiers grew from the ashes, and the famous Commando resulted in 1969, which proved to be the most powerful and best handling British motorcycle of the day. A choice of dual or single carburettors was offered along with the style of choice, including Scrambler, Street Model or a Tourer which was badged as the 'Interstate'. Electric start became available in 1974, but despite these improvements, the company once again fell into decline and went into liquidation in 1975. In 1972 BSA was also struggling, and in order to secure government help, was forced to merge with Norton-Villiers to form the Norton-Villiers-Triumph company. The 'Triumph' name came from BSA's Triumph subsidiary. Moving of production to BSA's Smallheath site caused industrial unrest at Triumph's Coventry factory. The workers at Triumph finally created a co-operative and went on alone. 1974 saw the release of the 828 Roadster, but the company was in dire straits and by 1975 was only producing two models.
The 80's and 90's was an unsettled time for the company, with ownership changing hands several times, both in the USA and Britain, but was purchased in 2008 after 15 years of US ownership, by British businessman Stuart Garner, so the marque that carried Che Guevara on his South American adventure lives on.

Tags: norton motorcycles
« Back to posts