Posted by Howard Trott on Monday, May 2, 2016 Under: Motorcycle Couriers
A garage in London wanted custom car parts picking up from Manchester and taking to their workshop in London. The customer told me over the phone that it was an emergency and I could tell by his voice he was panicking. They were working on a custom car for a client and had been sent the wrong parts. The car needed to be finished by the following morning so time was running out. He had ordered the correct parts and needed them delivered in a matter of hours. I enjoy a challenge so assured him the parts would be at his workshop in no time. 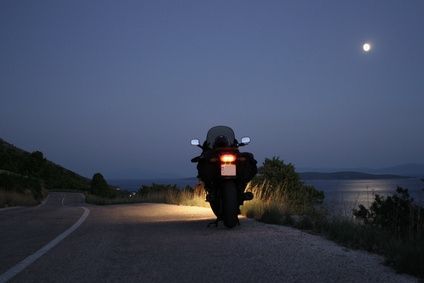 He told me the parts were only small and would be well packed in a box. I had just returned from a delivery, so got back on my machine and headed off to Manchester. The place where the customer had ordered the parts from was closed, but the manager had taken them home with him so there was no immediate rush to pick them up. As I got on the M62 motorway towards Manchester I was quite looking forward to the trip. The only things I'd have to contend with on the roads at that time of night would be HGV's, the odd car and maybe the odd animal if I had a countryside section to ride through.

I soon reached the end of that stretch of motorway, a few long roads later I was turning into the Managers street. When I make a long night delivery I can't resist glancing into peoples houses as I ride past, must be human nature or I'm just nosey. Had to laugh in my helmet as I passed one and glanced into their living room window. A woman was standing over a man who was sat in a chair, she was waving her finger at him and giving him a good ear bashing. His head was down and reminded me of a naughty schoolboy being told off. 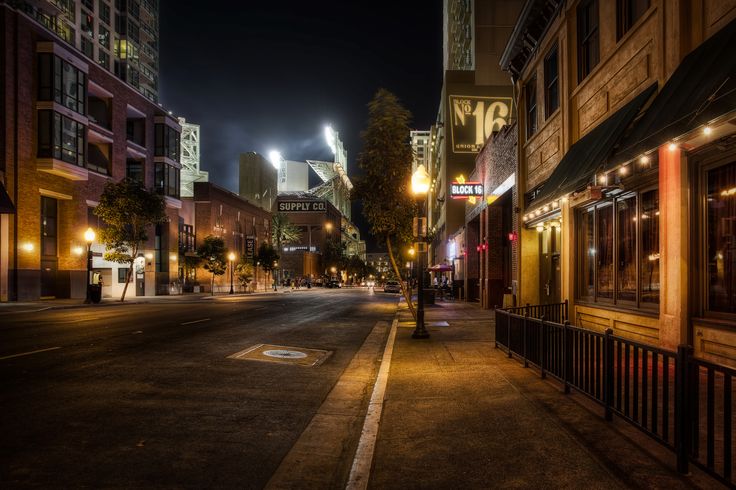 I glanced at my sat nav which showed I was almost there. Slowed down my motorcycle and started looking at front door numbers, it was dark but thanks to good street lighting could make out the numbers. Came to number 64, which was the Managers house. I was getting off my motorcycle when the front door opened, a man was standing in the doorway holding what looked like a small parcel. He acknowledged me as I got closer, when I reached him I couldn't help notice the pink robe he was wearing, looked down and he had matching slippers. He handed me the parcel and signed for it. I headed back to my bike smirking, as I thought about his taste in lounging wear. The parcel was small and well packed. Put it in my backpack, got on my motorcycle and off I went.

Riding at night is less hassle and you reach your destination quicker. You do see some odd sights, especially at motorway services when getting petrol. On one occasion there was a man laughing, bottle of wine in one hand sandwich in the other. He was trying to perform martial art moves but kept falling over, the more he fell over the more he laughed. One of the HGV drivers had probably dropped him off and he was on another planet. I always lock the bike when paying for petrol, you never know who is about especially at night. I like motorway services, they are like an oasis in the desert. When getting petrol I usually have a tea and a chocolate bar, which keeps me warm and alert. Some people never stop and take a time out, but it does help when you're on a long run. 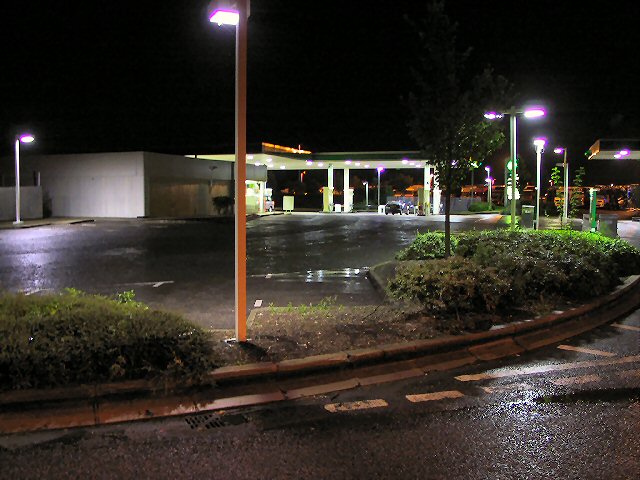 I finished the motorway section which was uneventful and entered the suburbs of London. The roads were quiet, all I could hear was the wind on my motorcycle helmet and the noise of my motorcycle engine. You do see the odd person and vehicle, at that time mostly taxis. Turned right into a long quiet street and noticed a girl walking on her own, as I passed she turned her head and I noticed she was crying. It's not advisable to stop in those circumstances, usually they think you're a crazy person and start running. I didn't want to frighten her, but she was crying so stopped and called to her from under my helmet. She ignored me and started to run, which was my cue to put my bike in gear and carry on.

Enjoyed riding through the quiet suburbs, up and down long winding roads, banking around roundabouts and avoiding cats who seem to cross the road last minute. Most of the traffic lights I came to were red which is annoying when you want to reach your destination.

Took a right, glanced at my sat nav which showed I had to take the next right. Came to the turning and stopped, I was looking down a dark lane with no lighting. This had to be it so slowly started to ride down it, the surface was pretty good and well maintained. In the distance I could see lights so opened the throttle a bit, as I got closer I could see a large shuttered building, the shutters on the left were up and could see movement inside. As I approached someone noticed me and came out. I pulled up by him, switched off my engine, got off my bike and was met by a handshake. 'Spartan Motorcycle Couriers, am I glad to see you,' was the first words he said. He led me into the workshop where I saw an amazing looking custom car, bright red with wide wheels. I handed him the package which he quickly opened, signed for it, thanked me then got back to work. An older gent shook my hand and offered me a cup of tea which was music to my ears. I spent the next 30 minutes drinking tea, eating biscuits and watching these highly skilled men work on a beast of a car. 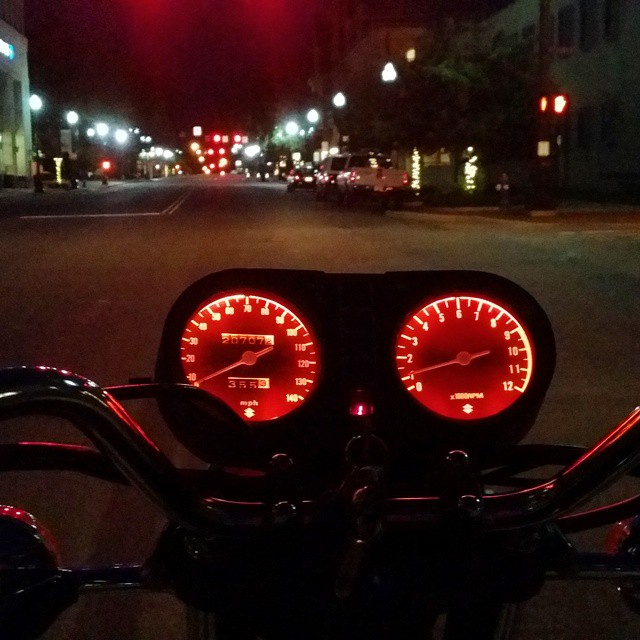 After I had my pit stop I said my goodbyes and got back on my two wheel beast. As I made my way back down the lane I thought about the amount of work that had gone into that custom car. Turned left back onto the road and looked forward to the long ride home.