Protecting your motorcycle while it's parked on the street

Posted by Howard Trott on Saturday, October 14, 2017 Under: Motorcycle Security
Leaving a motorbike on the street isn’t ideal, but if you have to do it there are a few motorbike security options to choose from that can deter an attack from thieves. 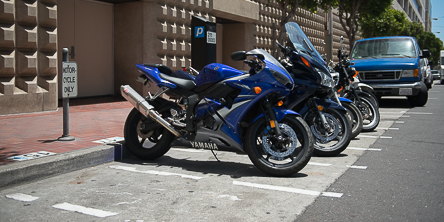 The number one rule of all motorbike security is that the more time a thief has to spend defeating security, the less likely they are to attempt a theft.
Hardened chains and closed shackle locks
If you are leaving the bike near your home, then I seriously recommend the Almax Immobiliser or Pragmasis chains. Case hardened 16mm+ chains are pretty much the only chains that can’t be cropped using bolt cutters and they are also very resistant to portable angle grinders (yes, bike thieves are increasingly carrying and using battery powered grinders).
The downside to these chains is that they are seriously heavy and pretty expensive.You can’t expect to protect thousands of pound’s worth of easily moveable motorbike with a £30 chain.
Many lighter chains are covered by the Sold Secure guarantee which means they should last against an attack for at least 5 minutes. However, if they aren’t hardened steel they are likely to be made of composite and will shatter easily if frozen and hit with a bolster. And now that portable grinders have arrived on the scene we wonder if the Sold Secure mark actually means anything anymore.
If they are solid steel, not composite, then to keep the weight down they inevitably made of thinner steel. Anything less than 16mm can be cropped.
If you can carry a heavy chain in your top box great. If you can’t and you have to use a lighter weight chain, follow these rules.