Posted by Howard Trott on Saturday, October 22, 2016 Under: Motorcycle Riding Skills
To rejoin the motorway

Don't pull straight out onto the carriageway. Use the hard shoulder as an acceleration lane to build up speed before joining the left-hand lane when there's a gap. 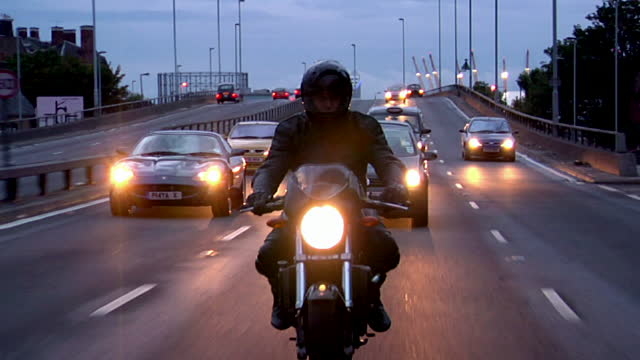 Accidents can often happen at roadworks when drivers fail to observe simple rules of safety. So - reduce speed in good time when warned by the advance warning signs or flashing signals - Get into the lane indicated for use by your motorcycle in good time - Obey all speed limits - Keep the correct separation distance from the vehicle ahead - Avoid sharp braking and sudden changes of direction - Don't change lanes when signs tell you to stay in your lane - Don't let your concentration wander - Don't speed up until you're clear of the roadworks.

These are temporary systems where traffic travelling in opposite directions share the same carriageway. They allow traffic to keep moving during repairs or alterations on the other carriageway. The lanes are often narrower than normal lanes. Red and white marker posts separate traffic travelling in opposite directions and fluorescent or reflective bright green/yellow studs often replace normal ones. Note - while contraflow systems are usually found on motorways, they may also be used on other roads carrying fast moving traffic.

Watch out for - lane change signs - vehicles broken down ahead. There's often no hard shoulder - vehicles braking ahead - keep your distance. 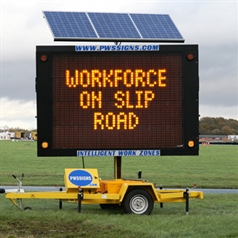 Minor maintenance work may sometimes be carried out without the need for major lane closures. Slow moving or stationary works vehicles, with a large arrow on the back of the vehicle, are used to divert traffic to the right or left as appropriate. There are no cones or other signs when these vehicles are being used.