Riding your motorcycle on country roads

Posted by Howard Trott on Saturday, August 26, 2017 Under: Motorcycle Riding Skills
There’s a great deal of satisfaction to be gained from riding your motorcycle skilfully on country lanes. There are other benefits too – there’s usually less traffic, fewer 30 mph speed limits, and some great scenery on offer, too. 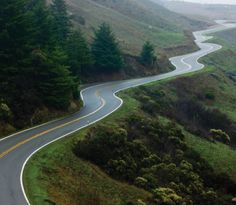 But it’s as well to remember that rural roads account for around three quarters of all fatal road collisions. There are many reasons why driving on these sorts of roads can be so hazardous.
Speed limits
Country lanes normally have a speed limit of 60 mph for cars and motorcycles. It’s fine to ride to that limit, if you know it is safe to do so. But your golden rule is that you must always be able to stop in the distance you can see to be clear ahead. And on narrow roads where there is no central white line, think about being able to stop in HALF the distance you can see to be clear ahead, simply because if you meet someone coming the other way, you will both need road space to stop safely…and half each is fair!
In poor weather, at night or on congested roads, then you will need to adjust your speed accordingly – to fit the road and weather conditions.
Sharing the road: farm vehicles
Let’s now think about who’s sharing the road space with us. There are cars, tractors, combine harvesters (most with drivers wearing ear defenders, so they won’t hear you) and other agricultural vehicles. They probably can’t go as fast as you want to go, but that doesn’t mean you should be on their tail, trying to get past as soon as possible. They can be long and wide, so build that into your pre-overtaking plan.
Sharing the road: animals
Expect to see dogs, horses, sheep, cows and other farmyard animals. They might be on the road because they’re being herded somewhere – or they might have escaped, making their behaviour entirely unpredictable.
Also expect wild animals. A deer, for example, is a heavy animal and could cause significant damage you and your motorcycle, following a high speed impact. If you see warning signs for animals, take them seriously. They’re there for a reason. 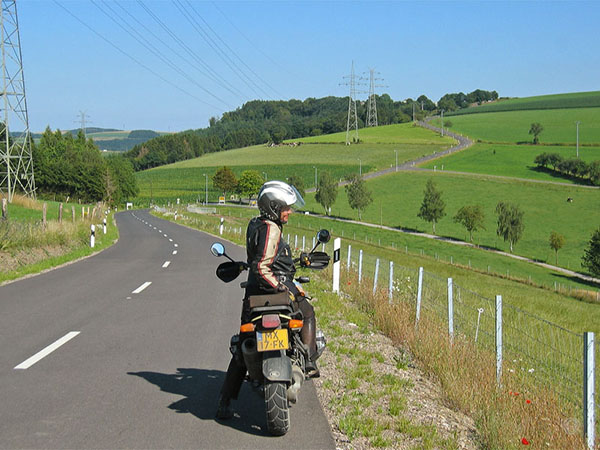 Sharing the road: cyclists and pedestrians
Cyclists, ramblers, and families out for a stroll are all possible on country lanes. Get into the habit of expecting to see someone on foot as you approach every bend or brow of a hill.
Sharing the road: tourists
Holidaymakers like country lanes. They like the views and the space. But they’re not going to be in any hurry. Be ready to follow a car towing a caravan at slow speeds, especially in summer.
Here’s our guide for maximising safety on a rural road journey:
As we learnt on the motorway, always scan ahead to the furthest distance you can see. Use all the clues such as hedge lines and telegraph poles to tell you where the road is going.
Familiarity breeds contempt…
However familiar with a stretch of rural road you may be, don’t let it make your riding complacent. You can navigate the same bend 99 times and never meet something coming the other way, but that doesn’t mean all will be well on the 100th time. Anticipate hazards such as oncoming vehicles, animals (wild and domestic), cyclists, pedestrians, debris and poor road surfaces.
Who’s behind?
We’ve talked so far about different hazards and risks, including slow vehicles. It may well be that YOU’RE the slow vehicle, because you’re enjoying a gentle ride in the country. But do think of others, who may have other priorities. Check your mirrors and glance behind frequently so you’re aware at an early stage of anyone lurking with obvious intent to overtake if they can.
Overtaking advice
A good overtake manoeuvre leaves nothing to chance. There’s no guesswork. You don’t even start overtaking until you have established exactly how and where the manoeuvre will end. Getting right up tight behind a slower vehicle won’t get you past it more quickly. In fact, by holding back you’ll get a much better view of the entire road and you’re more likely to see an opportunity to overtake safely.