Posted by Howard Trott on Saturday, May 5, 2018 Under: British Motorcycles
Through necessity, and in common with most other engineering companies of the day, Enfield didn’t restrict themselves to one line. They also made lawnmowers, bicycles and rifle parts for a Small Arms factory in Enfield. A clue lies in their logo which depicts a cannon, which I have to say, is infinitely better than a lawn mower. Their motto of ‘Made like a gun, Goes like a bullet’ is also evidence of their military involvement. In 1907, the company joined forces with a business with the unlikely name of ‘Alldays & Onions’, to produce the Enfield-Allday automobile. Fortunately, the onion was dropped. These cars remained in production until 1925. 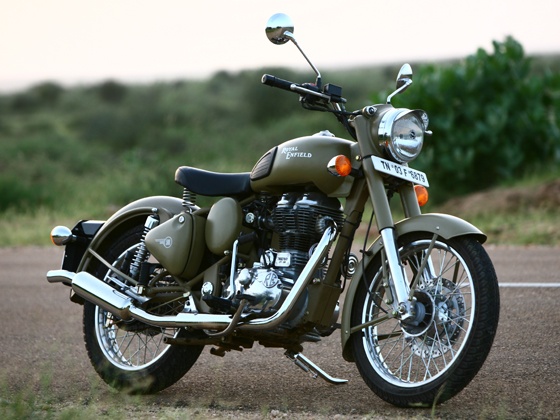 Royal Enfield produced their first motorised vehicle in 1898, a vehicle that would today be described as a ‘Quad’. This early effort had a De Dion-Bouton 2.75 hp engine. As the 20th century dawned, a bicycle with a 150cc engine mounted above the front wheel was introduced. The year after in 1902, a similar machine was fitted with a 239cc Enfield engine. The famous V-Twins appeared in 1910, primarily fitted with a Motosacoche 344cc engine, but later superseded by Enfield’s own power unit. The first small, two stroke engines saw the light of day in 1915 with the 200model.
With the outbreak of World War 1 in 1914, Royal Enfield was requested to furnish the British armed forces with machine gun-carrying combinations and stretcher-bearing motorcycles. The company also won a contract to supply machines to the Russians. In 1917, when most able bodied men were at war in Europe, a police force made up of women was issued with 600cc Royal Enfield motorcycles.
The time between the wars saw a boom in the popularity of sidecars, and in 1924 a combination using a 350cc single was launched. In 1928, saddle tanks and centre-spring, girder front forks were used. Royal Enfield bikes now took on a more contemporary appearance, and despite the economic gloom of the depression years, sales kept steady. A 488cc machine with a four speed gearbox was offered in 1927 and a side-valve 225cc in 1928. It seemed that the company could do no wrong, and during the thirties, Royal Enfield’s catalogue featured thirteen models. This is the time that the famous single cylinder ‘Bullet’ was born.
As the world once again fell into war, Royal Enfield rose to the occasion to produce a series of motorcycles for military use, the most famous of these being a 125cc bike called the ‘Flying Flea’. It was also known as the ‘Airborne’ because of its capability of being dropped by parachute. Special instruments for war use were also manufactured at this time.
In the fifties, Enfield of India began building machines with parts shipped from Britain, but in 1962 were producing complete motorcycles. Unfortunately, the factory in Redditch, England ceased production in 1970, with the Chennau plant in India still operating. Denomination rights were purchased by the Indians and the name lived on, which today enables Royal Enfield to claim the title of ‘The world’s oldest motorcycle model’. The bullet is in fact the model with the longest production run.
Between 1955 and 1960, Royal Enfield’s were sold in the USA as ‘Indian Motorcycles’. This of course had nothing to do with India in the Asian context. The famous Indian motorcycle company had experienced troubles of its own, and this was just another chapter in their particular history. The Americans weren’t too keen on badged motorcycles, and when the business agreement expired, Floyd Clymer, who had controversially claimed the ‘Indian rights’, sought other sources for his venture.
It appears that the ‘Enfield’ name has plenty of life in it yet. Enfield India continues making motorcycles and is indeed flourishing. In 1986, a civil servant from Britain named Raja Narayan went back to India to create an export arm for Royal Enfield, so in the same way that Raja had returned to his roots, so had the Bullet, which is now marketed in Britain.
Despite production moving from Redditch to India, the marque can claim to be the only one to span three centuries, and who knows, it may even reach a fourth. Whilst the Indian plant goes from strength to strength, the few buildings that remain from the Redditch glory days have been swallowed up by the Enfield Industrial Estate.