Posted by Howard Trott on Wednesday, July 6, 2016 Under: Motorcycle Couriers
Had a call from a gentleman who needed an antique automation picking up from a dealer in Manchester and delivering to Northampton. Was informed the automation was an early 1900's Puss In Boots Cat and rather valuable. It was already well packed so all I had to do was transport it safely and quickly. The gentleman was in a hurry to get it but couldn't pick it up himself. 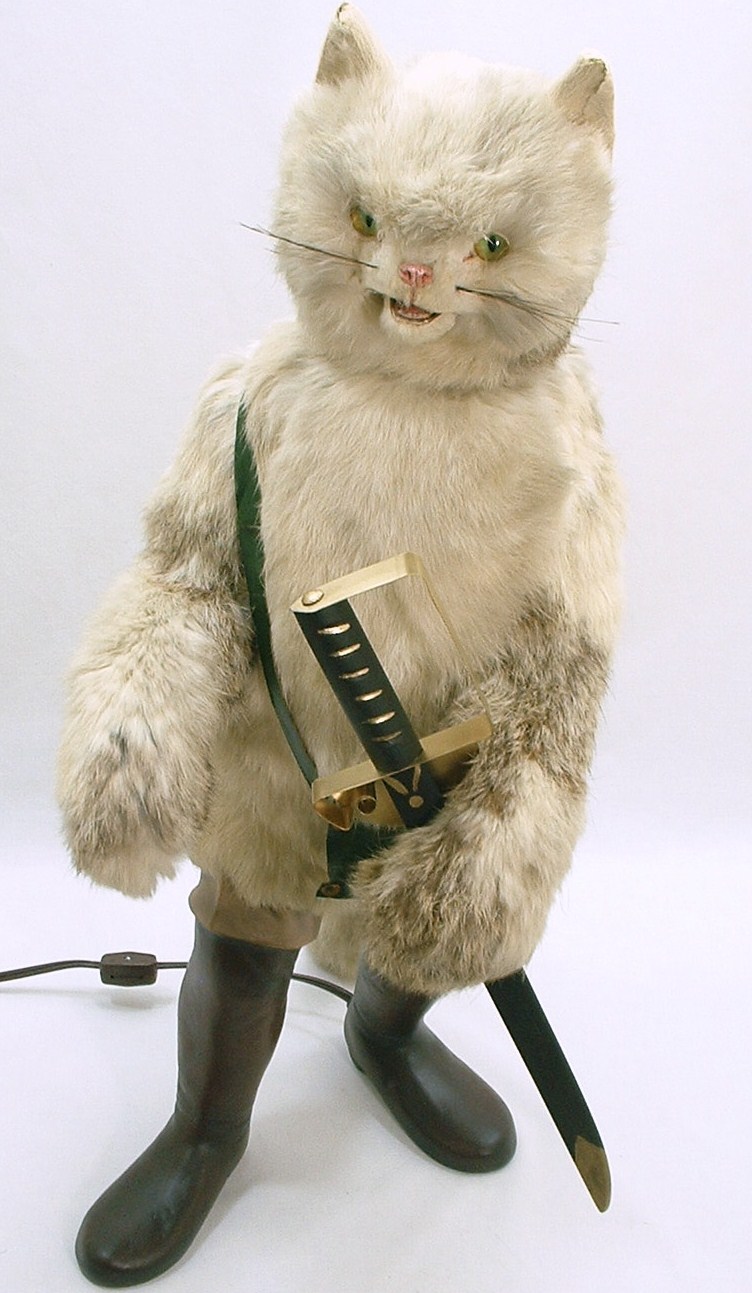 I got on my green automation and headed for Manchester. The traffic was congested but managed to weave my way through it. I did have a near miss when I was cutting through a line of traffic, a bloke decided to try and swap lanes by edging his car onto the next lane when I was approaching. I honked my horn and he replied with a hand signal of his own. I managed to cut through the traffic on the other side and pulled up next to him. I honked my horn again and looked into the car, this time he wasn't so cocky and looked straight ahead.

Arrived at the pick up point. Entered the antique dealers and was greeted by an elderly gentleman with a long beard wearing a suit. He was covered in gold jewellery, I like my bling but he beat me in that department. I told him who I was and handed him a printed copy of the receipt for the automation that the client had emailed me. He phoned the client to double-check then brought out a box. He gave me a picture of what I'd be carrying. The cat looked evil and must of given Victorian children nightmares.

I signed for the automation and he signed my sheet. He shock my hand, told me to drive carefully, winked and told me not to open the box if I heard a noise coming from it. Must be an antique dealers sense of humour, I wasn't transporting a Chucky doll. I put the box containing the cat into my backpack which I had filled with padding just as a precaution. Got on my motorcycle and off I went. Northampton is on the other side of London, I've rode to London many times so knew what was in store. The weather was cloudy and looked like rain, my backpack is waterproof and had put the box into a waterproof bag so the cat would stay dry if the heavens open up. I smirked to myself as I rode onto the main road, I should of brought some cat food in case he gets hungry.

The motorways towards London are always congested but didn't pose a problem, I cut through the traffic with ease. I don't mind motorway riding but it can be boring and monotonous and you tend to think of random things. Like what you're going to have for tea, what needs doing on the bike or dreaming about winning the Isle Of Man TT. After weaving my way through the motorway section of the trip I arrived at the outskirts of Northampton, my sat nav decided to take me down a section of country roads and lanes. The sky was black, I was in the middle of nowhere, all I could hear was the wind on my motorcycle helmet and my motorcycle engine. All I needed now was the cat to come to life, cut his way out of the box and backpack and attack me with his sword.

I rode down more country roads and lanes, glanced at my sat nav which showed I had two miles until I reached my destination. I turned into yet another country lane and was met by a herd of sheep. I pulled over and cut my engine. The sheep must of liked the colour of my bike as I few went up to it and gave it a sniff. The string of sheep seemed to go on forever, I wished the cat I was carrying was a sheep dog so he could heard the endless white bodies out of my way. At last the last of them went passed, followed by two men who nodded as they went passed.

I started my motorcycle and proceeded down the lane. A few lanes later I came out on a larger road, my sat nav told me I had reached my destination which was correct as opposite was a large white cottage. The name on the cottage confirmed I was at the right place. I pulled up outside, walked through the rusty gate and knocked on the door. It was answered by a smiling old gent, told him who I was and was invited in. I took the box out of my backpack and place it on a table, he was prepared and started to open it carefully with a knife, then he placed the cat on the table. The cat looked worse than the picture, he made it move which made it look like 'The Cat Of Chucky'. He turned to me and said 'isn't that beautiful', I just smiled. He was happy which was the main thing. He signed my sheet, I shook his hand and started the long journey home. Just goes to prove we are not all the same, what some people find ugly some find beautiful.