Transportation of cremated ashes from Wrexham to Staffordshire

Posted by Howard Trott on Tuesday, December 19, 2017 Under: Cremated Remains Courier
Had a call from Pentrebychan Crematorium in Wrexham who wanted fast, secure transportation of cremation ashes to John Short Funeral Directors in Staffordshire.

Made all the necessary arrangements over the phone then got my gear together. A word of advice to anyone thinking of becoming a motorcycle courier. Make a check-list of what you need to take with you on a job. Keep the list somewhere handy, so when you get your gear together you won't forget anything. Nothing worse than being on a long delivery and realise you have forgotten something.

Enough of the waffling, got on my green machine and headed out. A lot of the UK was blanketed by freezing fog which can be a pain in the backside. Visibility is not great and your visor and mirrors fog over all the time. The roads were slick so keeping your concentration is vital if you want to stay upright. 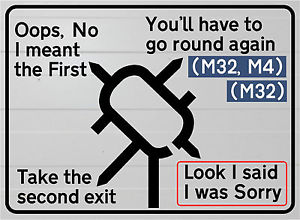 For all my readers outside the UK, for me one of the worse parts of riding on UK roads are the round-a-bouts. My trip to the pick-up at Wrexham for straightforward and hassle free, the cremated ashes were in it's own container and well packed so was just a case of putting it in my backpack. Yes round-a-bouts, the first part of my journey from Wrexham was annoying, there must of been eight round-a-bouts about one to two miles apart. The traffic was bad so spent 30 miles weaving through traffic and going around round-a-bouts.

Once I got that section out of the way I was happy to get on a major road and open the throttle. When riding on major roads or motorways, when overtaking a vehicle, I always glance at the front wheel. If it starts turning towards me it's time to take some action. Usually a honk of the horn and flashing headlights is enough to show the driver you are there. Hardly anyone thinks bike, they are usually chatting to someone in the car, on their mobile phones, or in Zombie mode.

It was a hassle free journey, had to ride down a section of country lanes and felt my tyres skate at certain sections besides that I arrived at the funeral directors in one piece and not in the back of one of their hearses. My journey home was the uneventful, the M6 motorway was full of traffic and roadworks which included a speed limit of 50mph and some massive pot-holes.
Cremation Ashes Courier