Posted by Howard Trott on Friday, October 13, 2017 Under: British Motorcycles
Triumph Bonneville is the name given to three distinct model lines of this notable British motorcycle. They share a parallel-twin four-stroke engine configuration, but the latest motorcycle to carry this name is of a totally new design and is manufactured by the modern successor of the original Triumph company.
The early 650 cc capacity production Triumph T120 Bonneville, often known as the duplex frame model, was replaced in the early 1970s by the T140 Bonneville which was the same basic machine but with a 750 cc engine. Later T120 Bonnevilles used a new frame which held the engine oil instead of a separate tank; this development of the Bonneville became known as the oil in frame version.
The current model Triumph Bonneville uses a modern engine and is unrelated to the original T120 and T140 in design. Since the arrival of this motorcycle, the earlier T120 and T140 have been popularly named ‘Meriden Bonnevilles’ and the modern version is known as a ‘Hinckley Bonneville’, reflecting the location of the two factories and to differentiate between the distinct types.
Development History
The original Triumph Bonneville was named after the Bonneville Salt Flats in the state of Utah, USA, where Triumph and other motorcycle companies made attempts on the world motorcycle speed records. It was popular (particularly in its early years) for its performance, compared to other bikes available. Although later enlarged to 750 cc, in the late 1970's and early 1980's it suffered when compared to more modern and reliable Japanese motorbikes from Honda and other manufacturers. The T120 engine, both in standard configuration and especially when tuned for increased performance, was popular for installing in café racers such as Tribsas, and particularly Tritons. 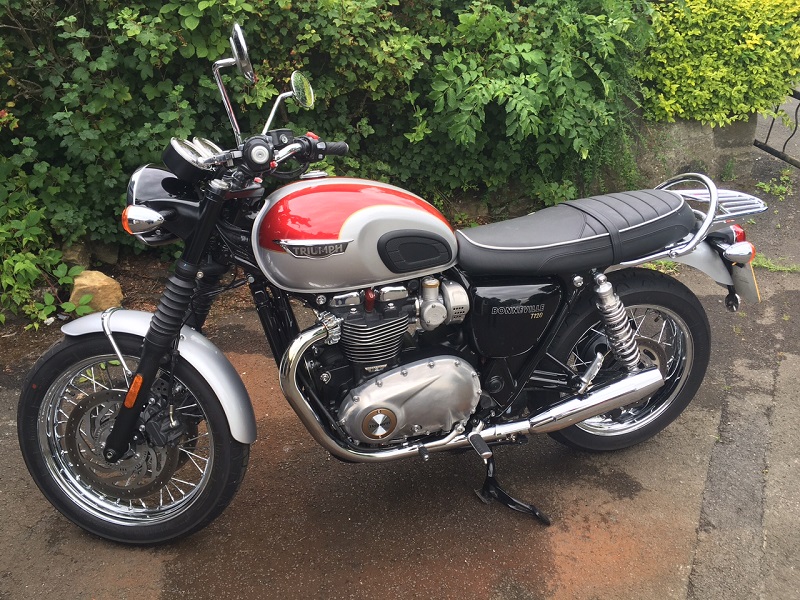 Triumph T120 Bonneville
The original Triumph Bonneville was a 650 cc parallel-twin (two-cylinder) motorcycle manufactured by Triumph Engineering Co Ltd and later by Norton-Villiers-Triumph between 1959 and 1974. It was based on the company’s Tiger 110, and was fitted with the Tiger’s optional twin 1 3/16 in Amal monobloc carburettors as standard, along with that model’s high-performance inlet camshaft. Initially it was produced with a pre-unit construction engine which enabled the bike to comfortably achieve 115 mph without further modification, but later (1963), a unit construction model was made which was more compact and added slightly to the stiffness of the set-up, together with additional bracing for the steering head and swinging arm. The steering angle was altered and improved forks were fitted a couple of years later, which, together with the increased stiffness enabled the overall performance of the Bonneville to match that of its rivals. 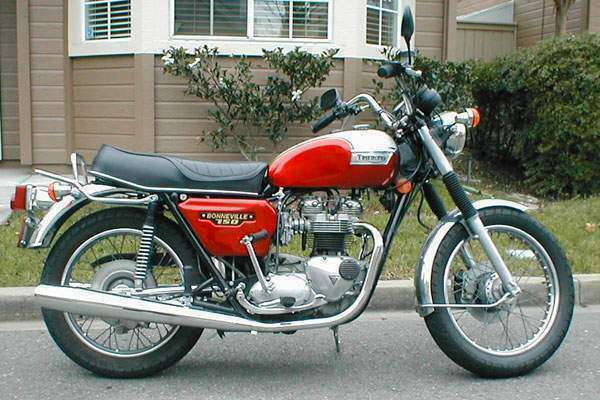 Triumph T140 Bonneville
Developed from the later ‘oil in frame’ (based on that of the BSA A65) version of the T120, the first few T140s, designated T140V, featured a larger capacity engine of 724 cc, a five-speed gearbox option and indicators, but still retained drum brakes and kick-start. Shortly after, the engine was further bored-out to 744 cc and front disc brakes were fitted (single discs before 1982). In 1975, along with engine modifications, the gearchange lever was moved from right to left to comply with regulations introduced for the American market. Several T140 models followed featuring various modifications and refinements until production ceased with the closure of the Meriden works in 1983.

New Triumph Bonneville
The new Triumph Bonneville produced by Triumph Motorcycles Ltd was released in 2001, and has a 790 cc parallel-twin engine of the same configuration as the original “Bonnie” as they are collectively known. The T100 Bonneville received the 865cc motor when it debuted. All 2007+ Bonnevilles have the 865cc motor. 01-07/08 Bonneville engines use a carburettor (as opposed to fuel injection), chain-type final drive, and other features consistent with the original production Bonneville. Except in The United States, All models from 2008 will be fitted with Electronic Fuel Injection to comply with emission regulations, in the United States EFI will debut in 2009. The Bonneville serves as the base from which all of Triumph’s “Modern Classics” line is derived, which includes the T100, Thruxton, and Scrambler, America, and Speedmaster.
In 2006, Triumph Motorcycles Ltd. launched the “Sixty-Eight” line of Bonneville accessories. These include both vintage and modern aesthetic modifications to include seats, seat covers, cam covers, sprocket covers, petrol tank covers, tank badges, panniers, and other items. The Sixty-Eight line provides a complete set of OEM parts that allow Bonneville owners to create a truly distinctive and unique motorcycle for less cost than traditional customisations. As of 2007, all Bonneville motorcycles have the larger 865 cc engine which offers slightly more power than the 790 cc unit but with no additional weight.
The Bonneville is held by many to be a “nostalgia” bike that serves as a reminder of the 1960s-era Bonnevilles, and is marketed towards the demographic of motorcycle riders who previously owned older-model Bonnevilles, but who also want the convenience of electric starting mechanisms, fewer oil leaks, and better fuel economy. Thus, “new” Bonnevilles have a reputation for being ridden by older motorcyclists and those who enjoy this bike’s timeless appeal. This claim is, however, unsupported by any concrete data, and some have reported that in major urban settings, Bonnevilles have begun to acquire a following among the 35-and-under crowd.

Tags: triumph bonneville
« Back to posts