Posted by Howard Trott on Thursday, January 16, 2014 Under: World Superbikes
The Brands Hatch round of the World Superbike Championship has become, like the Bol D'Or and the Daytona 200, one of those occasions that transcends motorcycle sport. Crowds regulary run into six figures, making it the best attended one day sporting event in the UK.

Rewind back to 1988, and the first ever World Superbike race, and an optimist might have counted 10,000 people inside Donington Park. Take today's spectator back to that first race and they would have trouble recognising it as a World Championship event. Then it was privateers in rusty vans, now its factory teams, corporate hospitality and huge crowds. The road from those humble origins to today's prominence hasn't been an easy one.

World Superbikes first problem was explaining exactly what the word 'Superbike' meant, because it implied different things in different parts of the world and had been used to label virtually anything that wasn't a Grand Prix bike. American racer turned promoter Steve McLaughlin was the driving force behind the birth of the World Superbike Championship and the man mainly responsible for drawing up the first set of rules. He did such a good job that it was years before they needed modifying.

The initial concept was simple, keep the main frame and engine castings untouched from the street bike on which the racer was based, allow race suspension, wheels and brakes, but keep the original bike's silhouette. The analogy that British Superbike Champion and World Superbike race winner John Reynolds always used to explain it was 'a touring car on two wheels'. It works as well as any explanation, but the indisputable fact is that no touring car has ever come anywhere near an F1 cars lap record, while Superbikes have regularly encroached on the lap times of Grand Prix bikes.

That's the attraction of the Superbike class, the bikes that anyone can buy in the showroom are raced by some of the best riders in the world. No factory has benefited more than Ducati. When the World Championship was born, Ducati was a tiny Italian factory in protective receivership, they gambled theit future on success in World Superbike, and three world titles in the early 1990's certainly helped, but the critical event was Ducati's launch of the 916 in 1994. It turned out to be one of the most successful racing designs ever, carrying Carl Fogarty to the first of his four titles. In no time at all, the Ducati brand was a worldwide style icon. 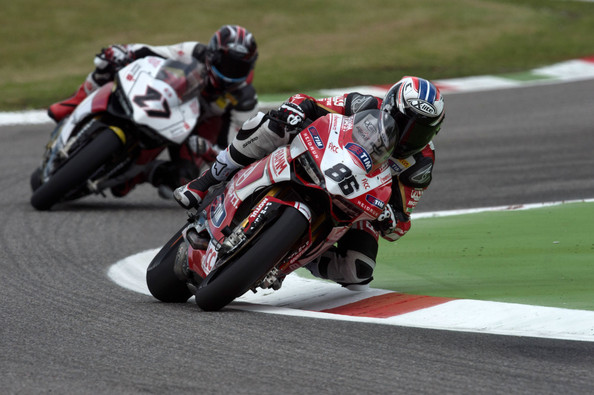